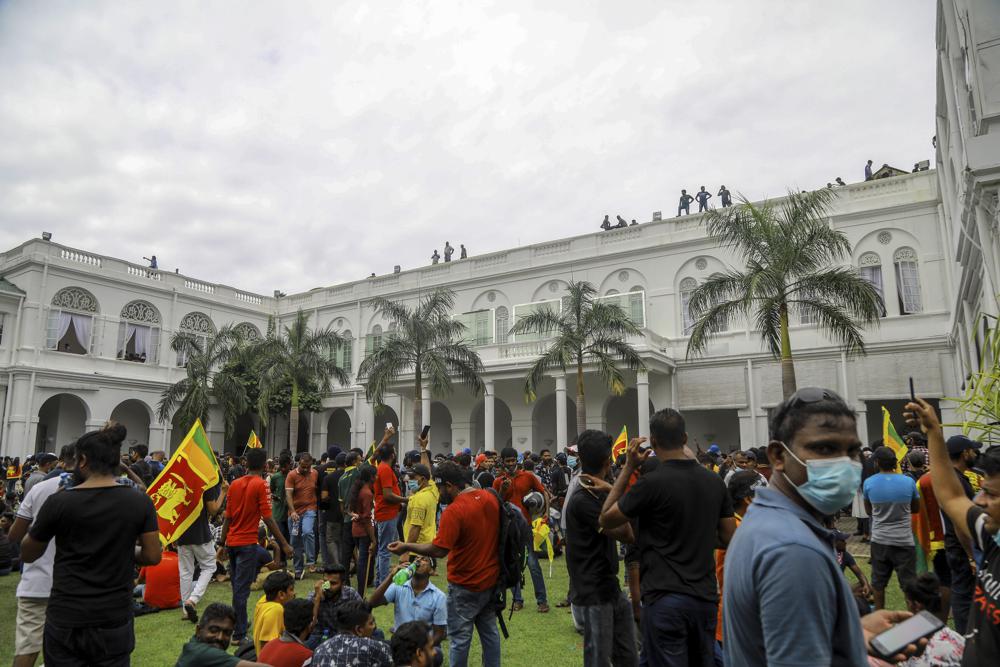 It was a moment that was waiting to happen and when it came, there was a sense of finality. The only issue is that news of Gotabaya Rajapaksa fleeing to safety only accentuates the problem that Sri Lanka is confronted with.

The visuals of the crowds ransacking the Presidential Palace is reminiscent of visuals that we saw earlier in Iraq and Libya. But, it was not expected in a nation like Sri Lanka which was a democracy with a stable political system. Though ravaged by decades long conflict with LTTE, Sri Lanka finally managed to break the vicious cycle of terrorism that devastated its Tourism industry. The nation of 22 million people, saw their fortunes nosedive thanks to an ill-fated fertiliser ban, to dramatic fall in production of Tea and Rice, further accentuated by a foreign currency crisis that sent the island nation into an abyss.

As Sri Lanka slid into a crisis, many countries gathered around to help and India was at the forefront trying to help out lines of credit, fuel and food supplies. That was a proverbial drop in an ocean, with a huge pent-up demand from a population that had taken things for granted. The blame on Sri Lanka’s present precarious situation can be placed right at the doorstep of the family rule of the Rajapaksas, who between them, destroyed a nation.

Ordinary citizens had to struggle and stand in long queues to get gas cylinders, milk powder, petrol, food items, and life-saving medicines. People’s anger against the government for mismanagement of the economy led to the call for Gotabaya’s resignation on social media. The anti-government protests in Sri Lanka began predominantly in March in rural areas and accelerated by the end of the month. By April, the movement spread across the island with the Galle Face Green in Colombo as the focal point of the movement.

Between the brothers, they had divided the most crucial portfolios of Defence & Urban Development, Law & Order, Economic Development, Finance & Planning and Ports & Highways. The hash-tag ‘Go Gota Go’ reverberated across the country. By May, most of the Rajapaksa clan resigned from their posts including Gotabaya’s powerful elder brother and Prime Minister Mahinda Rajapaksa. But Gotabaya himself continued, till yesterday.

Bringing in the opposition leader Ranil Wickremasinghe was the last-ditch attempt by Gotabaya Rajapaksa to quell the fire. Ranil tried his best to broad-base but he knew that he was fighting a hopeless situation. Now, that he has quit, no one knows what will happen next.

Will Sri Lankan Army step in a take over the reigns? Or will China step in with a blank cheque in return for unwritten favours. India is watching the fast-paced developments from the sidelines. Though there have been calls for India to make an intervention, PM Narendra Modi and his government is aware of the fate of the Indian Peace Keeping Force (IPKF) that Rajiv Gandhi had sent to evict the Tamil Tigers. That experiment ended in a disaster with over 3000 Indian soldiers losing their lives and Rajiv Gandhi meeting a gory end in Sriperambadur.

The next 48 hours is crucial for a nation that is technically without a government. Not many Sri Lankan politicians are willing to stake a claim, as they are aware that situation has reached a point of no return.

Even as Sri Lanka remains without a head of state, news is coming in that that nationwide fuel distribution is due to recommence this week. The World Food Programme Director is due to visit the country this week, and the debt sustainability report for the International Monetary Fund (IMF) is due to be finalised shortly. But who will they talk to? That is a million-dollar question.

Suresh Kochattil is an alumnus of Model High School OU Campusm He did his graduation from Osmania University and completed the Hotel Management Course from Chennai. He started his career with ITC Welcomgroup Banjara, Hyderabad in 1986. After working with the Taj Group in Bengaluru he joined the Times of India group in 1989. Relocated to their Hyderabad office in 1991. After having worked for over 17 years with the TOI grouo in various capacities ranging from Marketing, Creative cell to Journalism he parted ways with them. He joined the Apollo Hospital group and worked with them for 10 years. He relocated to Bangkok to work with Lebua Hotel & Towers for 1 year. A man who is passionate about what he does is currently the COO of Bharat Today, a news channel based out of Hyderabad. Active on the Social Media with a huge dedicated following, he is considered as an influencer. He is a part of TV debates on a regular basis. Suresh is married to Asha and is blessed with a daughter Arunima, who is a Mass Communication graduate from Manipal University.