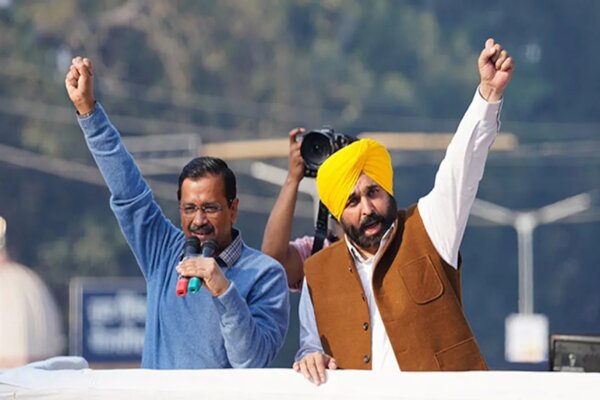 Delhi chief minister Kejriwal nominated the party candidates in all seats of Punjab, Uttar Pradesh, Goa and Uttarkhand assembly polls. Born out of the Anna Hazare led anti-corruption movement in 2011, the party now wants to expand its network across India.

AAP members and their sympathisers are now trying their best to project Kejriwal as an alternative to Prime Minister Narendra Modi.  It is understandable that the Punjab electorates have voted the party expecting the replication of various welfare schemes as AAP has implemented in the capital city. Hence their performance in Punjab is expected to help them to expand bases all over the country.

But amazingly the victory of AAP is not celebrated by any major opposition parties. It was assumed that the anti-BJP parties would come together to congratulate Kejriwal for the Punjab success, but it took a little long time.

TMC chief and West Bengal chief minister Mamata Banerjee, DMK chief and Tamil Nadu CM MK Stalin, Shiv Sena chief and Maharashtra CM Uddhav Thackeray , TRS chief and Telengana CM KC Chandrashekhar Rao, etc were not in a hurry to send congratulatory messages to  Kejriwal. Reasons of lukewarm responses by the opposition leaders are yet to surface, but saffron leader Modi promptly congratulated the AAP chief for the victory and assured all possible supports from the Centre for Punjab’s welfare.

Meanwhile, confusions started getting momentum as a banned Khalistani leader claimed that the Kejriwal-led party had won in Punjab polls with their funds. Banned outfit Sikhs For Justice (SFJ) in a viral letter warned the AAP leaders to remember their contributions in organising  pro-Khalistan voters in favour of the AAP nominees.

SFJ general counsel Gurupatwant Singh Pannun in a letter addressing AAP’s projected Punjab CM Bhagwant Mann asserted that his party achieved the electoral success only by bagging supports from  pro-Khalistan Sikhs in Punjab and hence Mann should help in facilitating a secessionist referendum for the independence of Punjab out of India.

Pannun stated in clear words that AAP was heavily funded by pro-Khalistan Sikhs based in Canada, USA, UK, EU and Australia. He even claimed that the AAP nominees used the name of SFJ to bag votes in rural constituencies, where the party had no earlier presence.

Pannun  at the same time warned Mann of untoward incidents in future. The banned separatist leader also stated that in 1995 then Punjab chief minister Beant Singh used bullets to stop the Khalistan movement and he faced the physical elimination.

Captain Amarinder tried to erase it with sedition charges and he had to witness his political death. Asking the would-be CM to learn from the fate of his predecessors, Pannun  asked the AAP leaders to support  the people in Khalistan referendum for deciding their own political fate (read disassociation from India).

Taking supports from a banned armed outfit in electoral politics usually backfire. Once, the militants of northeast India also tried to influence the Parliamentary and assembly elections. Wild allegations were framed against the Congress, Asom Gana Parishad, etc parties as the beneficiaries of militants’ influence over the common people. But it never works for a longer period as the militants come after the polls with their demands of secession.

Political leaders in power have to take pledge for  safeguarding India’s integrity and sovereignty. So often it turns suicidal for the political leaders who prefer militant’s support to ensure their electoral victory. In today’s India, where the spirit of patriotism starts spreading across the vast country, the electorates will not forgive any party or leader who use terror funding for achieving success in elections.

It’s a matter of serious security concern to the country as well. It will be a tragic development if a highly educated politician like Kejriwal is proved as a beneficiary of terror funding along with other political supports. AAP leaders are yet to make any clarification over the SFJ allegations, but today or tomorrow they must come clean over the matter. Needless to mention, the enlightened electorates will not support the anti-India agenda of any party or organisation any more.