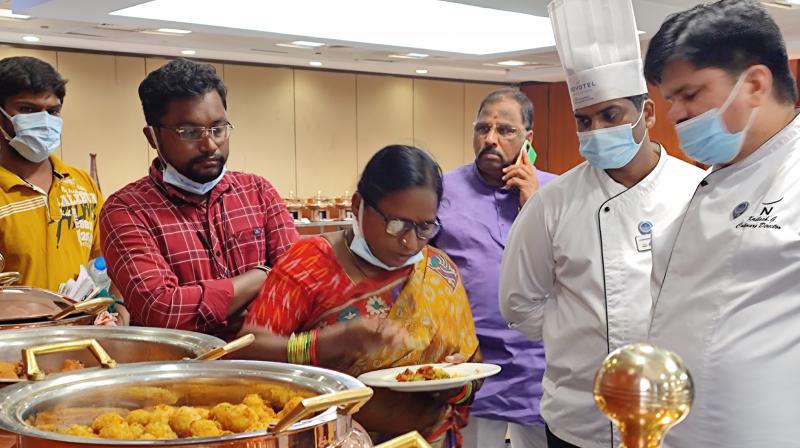 Bharatiya Janata Party leaders from across different parts of the country, who have been camping in Hyderabad for the last two days for the party’s national executive committee meeting had a taste of typical Telangana cuisine at the Hyderabad International Convention Centre (HICC) on Sunday.

Though the delegates attending the NEC have been enjoying the five-star hospitality for the last two days, the Telangana BJP has chosen to introduce them the specialised Telangana food items.

And the master chef for this sumptuous lunch was Goolla Yadama of Gudatipalli village of Husnabad mandal in Siddipet district. A six-member team led by Yadamma was involved in preparing as many as 50 different types of dishes to treat for the palate of BJP stalwarts, including Prime Minister Narendra Modi, Union home minister Amit Shah and BJP national president J P Nadda, besides Union ministers, chief ministers of several states and executive members.

Telangana BJP president and Karimnagar MP Bandi Sanjay, who engaged Yadamma, was the man behind the menu prepared keeping in view the tastes of the BJP leaders hailing from different parts of the country.Apart from all the items that were served for the lunch, even snacks, sweets and desserts were prepared exclusively in Telangana style.

The spread of sweets included Paramannam made of jaggery, Seviya pudding, sweet puran polis and ariselu.Similarly, snacks included “gaarelu” made of moong dal, sakinaalu, makka gudaalu and sarva pindi with various chutneys like that of tomato, groundnut, coconut and chillis.