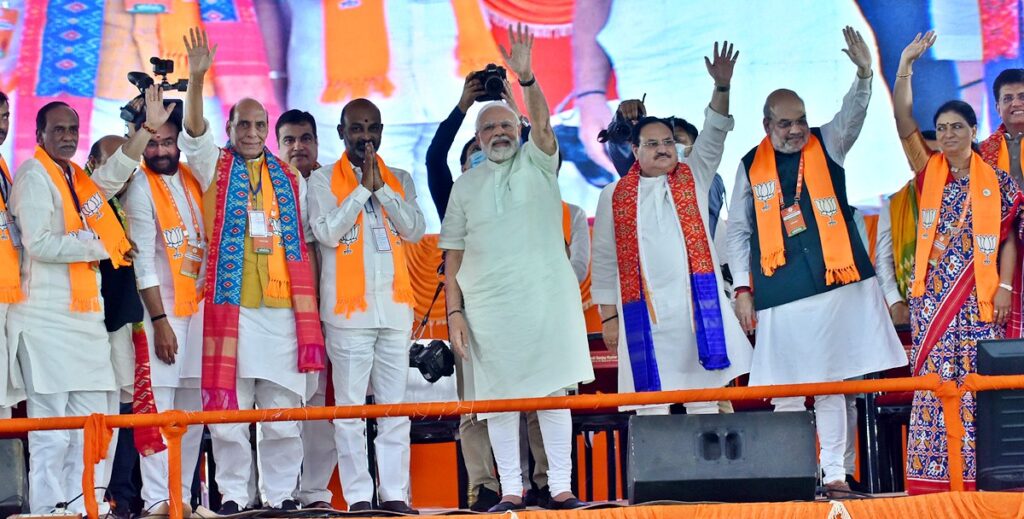 Stating that people of Telangana yearn for a ‘double engine growth, Prime Minister Narendra Modi asserted that t his will be fulfilled when the BJP comes to power in the state.

Addressing a massive rally titled ‘Vijay Sankalp Sabha’ at the Parade Grounds, Secunderabad on Sunday evening, after conclusion of two-day National Executive Meetings of BJP, he expressed satisfaction over growing support for the BJP in the state.

Recalling that Telangana people have supported BJP during 2019 polls in a big way (BJP had won 4 of 17  Lok Sabha seats in the state) and later continued in Greater Hyderabad Municipal Corporation elections. The support is growing for every successive poll, he said and added this demonstrate their urge for a BJP government in the state.

He said that BJP is making continuous efforts for the development of Telangana and assured that the state’s all-round development is among the party’s top priorities. Modi set the tone for the 2023 Assembly polls and the 2024 Lok Sabha elections as he claimed that the BJP’s support in the southern state is increasing.

He announced that the Center will set up one of five proposed Mega Textile Parks in Telangana, besides a Science City in Hyderabad. During last eight years, he said Center had purchased Rs 1 lakh crore worth paddy from Telangana farmers.

Under Jan Dhan scheme, while over 45 crore bank accounts were opened all over the country,  Modi said one crore accounts were opened in Telangana alone. To resolve traffic hurdles in Hyderabad city, he said that Center is assisting Rs 1,500 crore worth flyovers and elevated express highways in Hyderabad city, besides Regional Ring Road with Rs 350 crore.

Highlighting the work done by the NDA government at the Centre for the welfare of the masses, Modi said: “During the past eight years we tried to bring positive change in every Indian’s life. We are working tirelessly on how to make people’s lives easier, and how to take the fruits of development to every person and region.”

Modi also claimed that the government’s development projects have benefited people across all sections of society especially farmers, youngsters, women and the marginalised communities. During the Covid-19 pandemic, a disaster after 100 years, the central government tried to support every family in Telangana, he said.

Earlier, addressing the concluding session of the party’s national executive meeting, Modi referred to Hyderabad as ‘Bhagyanagar’, giving out a political signal amid the BJP’s demand for renaming the capital city.

“PM Modi said that Hyderabad is Bhagyanagar which is a significance for all of us. Sardar Patel kept the foundation of a unified India and now it’s BJP’s responsibility to carry it further,” Modi was quoted as saying by BJP leader Ravi Shankar Prasad.

The one liners of Venkaiah Naidu are also wit liners, says PM Modi