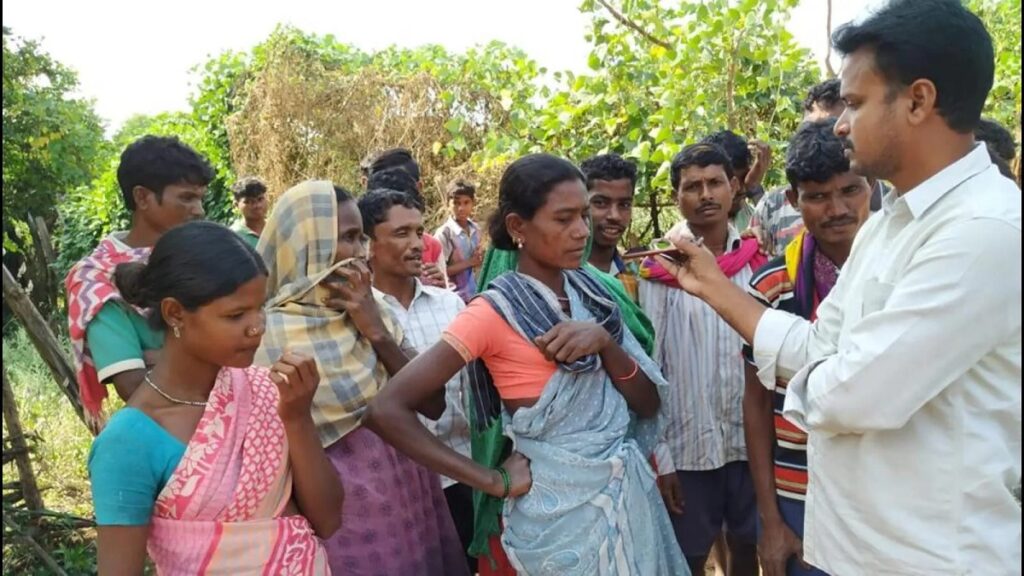 In Telangana, a flagship government programme called Telangana ku Haritha Haram (literally translates, this means ‘A green necklace for Telangana’) has been initiated. One of the many impacts of this programme was that the farmers who were using the forest land for generations, in Bhadradri-Kothagudem district of Telanagana, were asked to give back the land to the government so that “forests can be grown”.

This led to conflict between the formerly Podu (Slash and Burn agriculture) cultivators who are now settled in forest regions of the state and forest department. Podu — a term that means ‘slash and burn mode of agriculture’ is now used to refer to all types of cultivation in the areas neighbouring the forest, and has been a recurrent issue in the region.

While previously, some indigenous tribes used to engage in this practice of burning the forest, cultivating for a cycle and leaving the land, this practice actually ended long ago and people have settled down in their lands. The story of these Podu lands and the difficulties faced by the indigenous peoples in getting their land rights under the Forest Rights act, 2006 is something to be studied closely. This is one side of the story i.e., of the local forest dwelling people of the state.

Another story is that of migrants from, who have found themselves in one conflict after another. Guttikoyas, a tribe originally living in Chhattisgarh (the tribe is known as Mura in Chhattisgarh), had to escape the long-standing conflict that has ensued between Maoists and Salwa Judum- a counter insurgency militia consisting of tribal youth and backed by the Chhattisgarh government.

They migrated to the nearby forests of the then combined Andhra Pradesh and Odisha and as a result, a considerable population settled in what is now the Bhadradri-Kothagudem district of Telangana.

Naturally, these communities which migrated needed land for sustenance and they also depended on forest in terms of minor forest produce etc. However, since these are relatively new communities to come into the area, their occupation of land has always been viewed as “encroachment of the land” which has to be taken back. There have been conflicts between all Adivasis in that area and the forest department regarding the reclamation of land.

Gutti Koyas, however, had a weaker claim to the Podu land compared to other tribes of the region and this fact, too has strengthened the view that “Guttikoyas are encroachers who are illegally living in the area”. Moreover, although they are considered as STs in Chhattisgarh, they do not enjoy the same protection in Telangana.

According to Article 342 of the Indian Constitution, the President, after consultation with the Governor of the state, notifies the Scheduled Castes and Scheduled Tribes in that particular state. Therefore, the list for Telangana and Chattisgarh would be different and thus, the Guttikoyas’ ST status in Chattisgarh does not translate into ST status in Telangana.

Recently, a forest range officer’s death in the district involving two Gutti Koyas as the accused has attracted much attention, giving the Guttikoyas notoriety. The media’s sensational coverage of the officer’s death worked to further vilify the community. This resulted in a gram panchayat passing a resolution to “evict Gutti Koyas under its jurisdiction and sent back to Chhattisgarh” post the incident.

This (gram panchayat) resolution was termed as bad in law by the Telangana High Court since the Panchayat does not have the authority to evict the Gutti Koyas.[5] The government argued that the Gutti Koyas have become “habitual offenders and should be evicted”.

However, this is only a small respite for the community which is now facing an angry forest department, cautious politicians and a volatile future.  There also have been demands from the Forest Department officers to grant them arms so that they can defend themselves. This demand is yet to materialise. According to officials, 30 acres of land has been “encroached upon” by Gutti Koyas in the Khammam district.

Essentially, even though Gutti Koyas are not STs under the Telangana law, they are vulnerable due to the special circumstances they are in. Neither can they go back to their state which they left some 20 years ago and nor can they find themselves a piece of land that will not be reclaimed by the forest officials.

There were instances in which the Gutti Koyas were made to work for extremely low wages, so that their dependence on forest can be overlooked by the forest officials. Therefore, without the status of STs and without a place to call home, these Internally Displaced Persons (ISDPs) face violence, persecution and different forms of exploitation.

And given that their displacement was a result of conflict- their trauma, and reasons to not go back to their state are huge. This calls for special protection of the community which is absent not in reality but also in discourse.