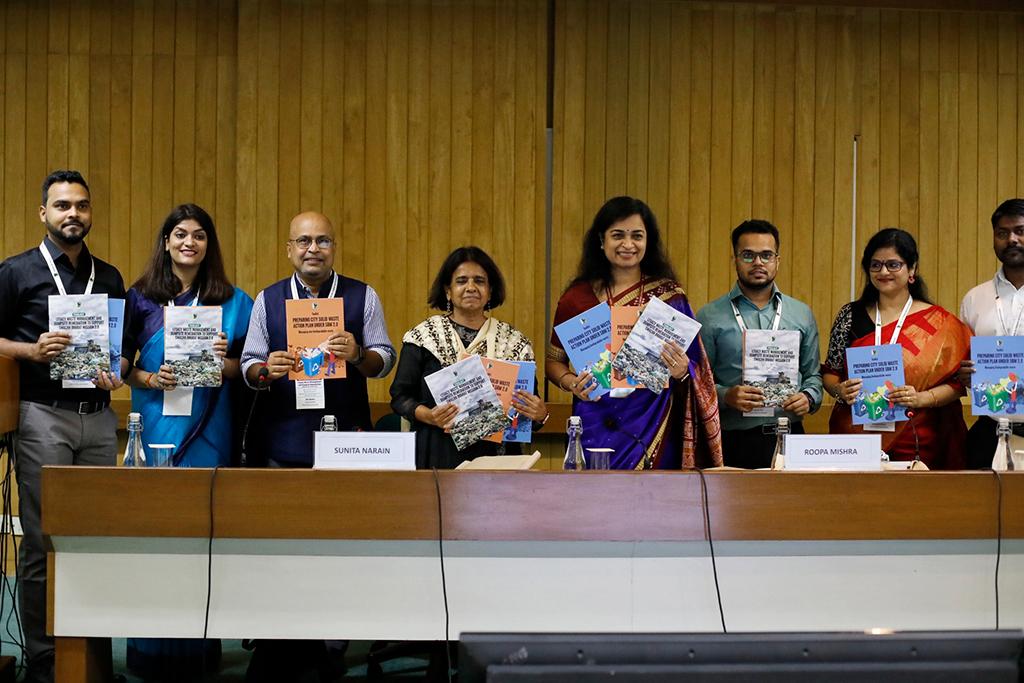 “The term ‘legacy waste’ has received close attention in the wake of Swachh Bharat Mission (SBM) 2.0 which aims to make Indian cities “garbage-free”. The Mission mandates that cities in India should clear legacy waste sites, reclaim the land, and prevent more waste from reaching dumpsites – with 1,300 million tonne of legacy waste lying in more than 3,000 dumpsites in the country, it is an onerous, but doable, task,” said Sunita Narain, director general, Centre for Science and Environment (CSE).

She was speaking at a national symposium organised by CSE on legacy waste management and dumpsite remediation.  Roopa Mishra, joint secretary, Union Ministry of Housing and Urban Affairs (MoHUA), was the chief guest.

Explains Atin Biswas, programme director, solid waste management unit, CSE: “Although the term ‘legacy waste’ has not been defined in any official government document in India, it typically refers to old municipal solid waste in landfills or dumpsites. There is no set standard to define how old waste qualifies to be called legacy waste. Legacy waste is usually a mix of partially or completely decomposed biodegradable waste, plastic waste, textiles, metals, glass and other components.”

She said that the agenda is to clear unscientifically designed and mismanaged dumpsites that might be causing or can cause long-term environmental and public health hazards. Majority of Indian landfills have completely run out of space having been overused and housing millions of tonnes of legacy waste which not only poses threat to the environment but also to human health, livelihoods and economy.”

Roopa Mishra stressed on the fact that every Central government programme and policy was primed towards a singular aim: “making Indian cities garbage-free”. As part of this objective, the ministry has initiated a number of projects and schemes to encourage city administrations, one of which is a star rating and certification for garbage-free cities.

Earlier, CSE’s Richa Singh – in her presentation — outlined the government’s deliberate initiatives in legacy waste management: “The MoHUA has recognised the fact that unlined dumpsites are causing air and water pollution and creating long-term environmental and health hazards. The operational guidelines of SBM 2.0 make it mandatory for cities with a population of less than one million to clear legacy waste sites by March 31, 2023 and cities with a population of over one million to reclaim the lost land by March 31, 2024.”

She added: “In addition, MoHUA has committed substantial financial devolution to support the cities to meet the cost of legacy dumpsite remediation. As much as Rs 1,41,600 crore has been committed in the Union budget to support the mandate under SBM 2.0 – this is the single largest investment in a flagship sanitation programme in independent India.”

According to Singh, the cost for dumpsite remediation in India will add up to Rs 1,04,000 crore, as per estimates done by CSE.

Says Biswas: “SBM 2.0 mandates every urban local body to prepare a City Solid Waste Action Plan (CSWAP) for seeking funding and a City Sanitation Action Plan (CSAP) to avail the grant for sustainable sanitation. There are clear benchmarks in the performance-linked financial devolution to ensure that every urban settlement achieves a certain milestone before it becomes eligible for the next tranche of money.”

CSE researchers point out that the national mandate has created a huge momentum to deal with the legacy waste lying in dumpsites. Says Biswas: “It is also imperative to prevent fresh waste from reaching existing dumpsites to ensure the reclaimed lands are never lost again. The Mission mandate for every Indian city is to stop as much as 80 per cent of its waste from reaching a dumpsite by the end of 2026.”

“Waste is a resource,” says Narain. “We should not ‘waste’ our waste, but reuse and recycle it. Even as cities in India start focusing on remediation of their legacy waste, it would be critical to ensure gainful application and final disposal of the extracted fractions received from the existing garbage mountains.”

The CSE toolkit on legacy waste management offers the following steps in the roadmap: