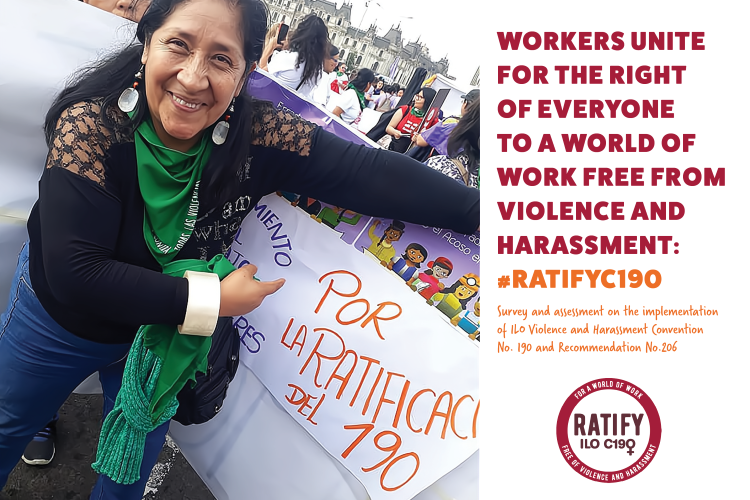 The ground-breaking work of unions in every corner of the world for the ratification and implementation of a key ILO convention to tackle violence and harassment in the world of work has been captured by a new ITUC survey and report, as part of the ITUC’s #RatifyC190 campaign.

Workers unite for the Right of Everyone to a World of Work Free from Violence and Harassment:#RatifyC190, documents how trade unions are turning C190 and R206 into legal reforms and workplace policies that improve the daily lives of working people in all their diversity.

It underpins the urgent call on governments and employers to do more to make the benefits of C190 and R206 a reality now.

The survey of 107 ITUC-affiliated unions in 70 countries revealed that:

ITUC General Secretary Sharan Burrow said: “I congratulate the affiliates documented in this report for their work to turn C190 and R206 into real change on the ground.

“Violence and harassment at work, particularly gender-based violence, is a major problem in all parts of the world and in every sector. It destroys lives, denies women the chance to fulfil their potential and contributes to wider repression in society on the basis of people’s gender identity, ethnicity and social status. Everyone has the right to a world free from this.

“We need to see governments and employers matching the activism of the trade unions. Governments must involve workers’ unions as social partners in social dialogue and collective bargaining and ratify and implement C190 and R206 as soon as possible.

“Employers must do the same by integrating C190 and R206 at sector and workplace level and ensure this happens throughout their supply chains.”

Trade unions will intensify their actions as part of the #RatifyC190 Campaign in the lead up to the @16DaysCampaign.

The survey included 26 unions in Africa, 20 in the Americas; 23 in Asia-Pacific; 8 in the Middle East and North Africa and 30 in the Pan-European Region.