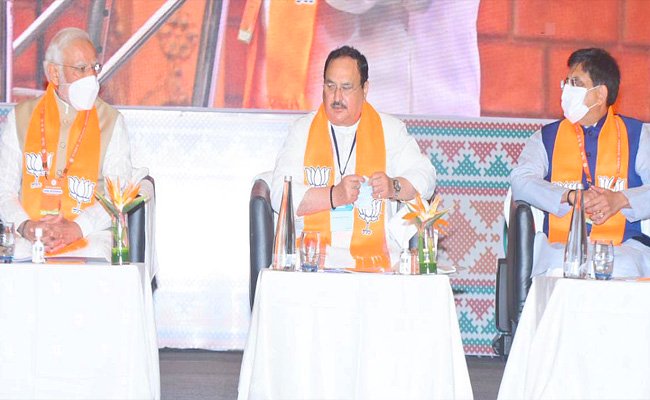 The two-day National Executive meeting of BJP, to be concluded later today is mainly focusing on expanding its organizational base in the Southern states, aiming at coming to power in Telagana in the next assembly elections. It is likely to adopt Hyderabad Declaration, narrating its strategies on how to spread into areas, where its performance so far it not well.

It has already identified as many as 144 Lok Sabha constituencies, where it didn’t won till now, besides 74,000 polling booths where the party machinery is found not sound.

To keep the cadre engaged, and strengthen the organisation, BJP chief J.P. Nadda said the party will reach 20 crore people through ‘har ghar tiranga’ programme and engage with the 30 crore listed beneficiaries of central government schemes.

Speaking during the meeting of office bearers at the BJP national executive meeting in Hyderabad, Nadda assigned more tasks to the partymen. The party needs to be strengthened at the booth level, and each booth should have 200 active members associated with it.

“It is important to strengthen the booth, interact with cadre which in turn helps in engagement with the people. Every booth should have 200 active cadre, and WhatsApp groups should be set up at grassroots levels to engage with people. Efforts should be made to take PM Modi’s Mann Ki Baat talkshow to people,” party vice president and former Rajasthan CM Vasundhra Raje Scindia said quoting Nadda.

Scindia said the party will come out with two resolutions, one on political situation in the country and other on economy and gareeb kalyan (pro poor) measures.

Bharatiya Janatha Party (BJP) is adopting new strategies to seek support from different communities with an eye on the next elections in Telangana. Senior BJP leaders, including Chief Ministers and others, who arrived in the city to participate in the party National Executive Committee meeting, have been directed to interact with different linguistic communities in the city.

During their meeting, the BJP leaders reportedly spoke about the current political situation across the country. They also briefed about the welfare and development initiatives being taken up by the BJP Government.

In addition to these meetings, BJP representatives have been assigned the task of visiting all the 119 Assembly constituencies. They have been asked to interact with local people and list out the issues being faced by them.

90% of Afghan suffering from form of food security, says WFP