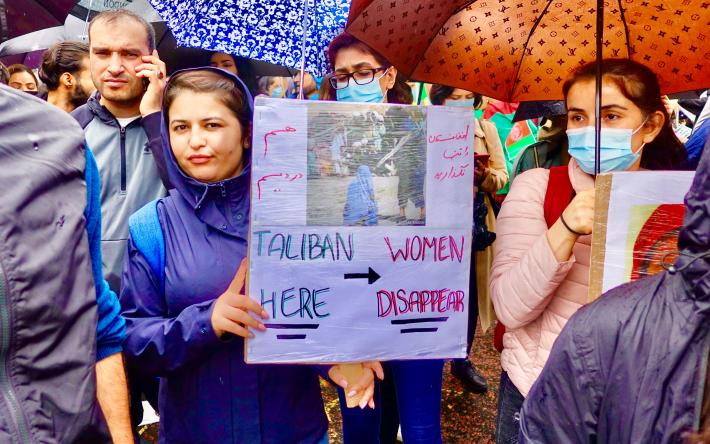 “Afghanistan’s human rights advocates are in dire straits as they struggle to survive the return of the Taliban or live on the edge in transit countries. Governments and international groups can help them find safety and keep hope alive for their fellow citizens”, said Anne C. Richard, Afghanistan Coordination Lead/Distinguished Fellow at Washington-based Think Tank Freedom House.

Since overthrowing its elected government in 2021, the Taliban have amassed a terrible record of misrule in Afghanistan. The country’s media sector has collapsed, minorities are subjected to horrendous violence, and women and girls have watched their rights disappear.

That record worsened on December 20, 2022, when universities were closed to women. Days later, the regime banned women from working at domestic and international nongovernmental organizations (NGOs) and threatened to revoke the licenses of non-compliant groups. Risking their lives, some college-aged women took to the streets to protest the theft of their educational opportunities. Aid agencies, meanwhile, objected to losing their female staff, and several have suspended their activities.

But what of Afghanistan’s human rights defenders (HRDs) who, for two decades, openly advocated for a free and democratic country? Last year, Freedom House joined with the Afghan-Canadian Civil Society Forum—both of our organizations helped found the Afghanistan Human Rights Coordination Mechanism—and helped conduct a survey to learn how they are faring, determine their needs, and gauge the effects of Taliban rule. The findings are grim.

“A Needs Assessment of Afghan Human Rights Defenders” summarizes the findings of the survey, which was answered by 663 people, two-thirds of whom are still in Afghanistan. Ninety percent of HRDs who remained said they experienced violence or some other form of mistreatment.

One-third of our respondents managed to escape Afghanistan but are also frightened—for themselves as they cope with precarious living arrangements and for their families back home—and are often unable to resume their advocacy. Instead, they rely on rapidly diminishing savings or whatever informal work they can find.

HRDs who fled the country did not always find relief at their destinations. Some 45.4 percent of out-of-country participants said they experienced psychological harm, while 33.7 percent said that authorities in transit countries harassed them or threatened their deportation. HRDs abroad also reported dealing with constrained family finances, harassment from other actors, and security threats.

Women face a unique set of challenges. In addition to facing the same threats leveled at men, the report finds that women are particularly vulnerable to allegations of prostitution or immorality, punishable by whipping or death by stoning under the Taliban.

Women in Afghanistan, including HRDs, are socially isolated, cannot move freely, cannot work, and must shoulder all of the caregiving for their families; they are effectively imprisoned in their homes and face mental health challenges as a result. Female focus group participants also talked of sexually charged threats, harassment, and defamation that leave them feeling defenseless.

But even as Afghan HRDs face tremendous danger, they are fighting to remain in the national conversation. In-country workers, for example, have pivoted to providing humanitarian assistance and addressing less controversial subjects, Anne C. Richard added.

HRDs who escaped to Europe and North America, meanwhile, advocate for fellow Afghans even as they confront their own trauma; half of exiled respondents wanted to continue their work, in fact. What can be done to protect these HRDs as they try to speak out for their fellow citizens and secure their own safety? Actually, a great deal.

Nearly half of in-country survey respondents called for the return of a national mechanism to protect individual rights, like the joint commission established by the elected government in 2021. Such a mechanism could be supported by UN agencies, like the UN Assistance Mission in Afghanistan (UNAMA), and other international groups. Diplomatic missions in Kabul can provide oversight.

Afghans in transit countries live in treacherous circumstances, withstand mistreatment, and fear deportation at the hands of the authorities there. These governments should not deport or intimidate people who already live in fear. They should instead provide visas, allow access to formal labor, and use dignity as a lodestar in their dealings during these Afghans’ stays. UN and other aid agencies can also help Afghans meet their basic needs and receive psychological counseling.

These displaced human rights champions, who often wish to move on from bordering countries, ultimately should be registered as refugees and resettled in more welcoming and safer nations. Existing programs can be expanded to deliver more HRDs and their families to safety.

Those who aspire to continue their work, at home or abroad, can benefit from international help; domestic NGOs would be more effective with the resumption of financial support, which evaporated after the republic collapsed. International groups can meaningfully collaborate with exiled HRDs.

As the Taliban freeze Afghans out of their own society with each new edict, the odds of achieving constructive change are slim. But Afghanistan’s HRDs are clear about what they need and about what they can do with the world’s help. We owe it to our partners and allies to provide that help and keep the cause of freedom alive, even in one of Afghanistan’s darkest moments.