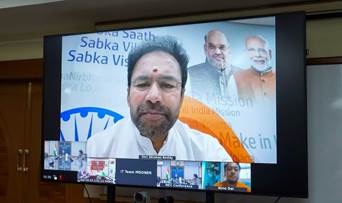 North East India is blessed with amazing food, culture, stunning landscapes, heritage and architecture and ranks among the most beautiful places on the earth.  But, there are grand opportunities that can be filled to boost Tourism Sector in the Region.

It would ideate, discuss & formulate the ideas & suggestions by Thought Leaders, Policy Thinkers, Social Media Influencers, Travel & Tour Operators And The Senior Officials of Ministry of DoNER and State Departments.

Terming as a ‘Traveller’s Unexplored Paradise’, Minister Kishan Reddy said that “North East India is a rare combination of Scenic Beauty, Unique Cultures and abundant in Natural Resources and Government of India under the visionary leadership of Prime Minister Narendra Modi is committed towards the rapid and accelerated development of North Eastern Region. Reddy believed that SymphoNE will serve as a great platform to deliberate and work together to unleash the tourism potential of North Eastern Region.

Gujarat polls to be held in two phases on December 1, 5