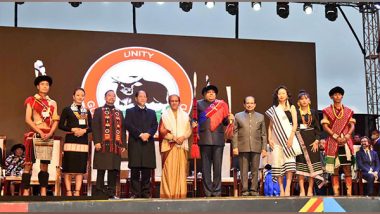 Vice President,  Jagdeep Dhankhar inaugurated the 23rd edition of Hornbill Festival at Naga Heritage Village, Kisama near the state capital, Kohima. He sounded the Inauguration Gong along with the Governor & the Chief Minister of the Nagaland to declare the “Festival of Festivals” open.

Dhankhar, who arrived on his maiden tour to Nagaland as the Vice President, was felicitated with Tsiiphie (traditional Naga headgear) & Amula kaxa (Naga shawl) at the opening ceremony. Addressing the gathering, he  said that India is a land of culture & Indians are proud of their tribal culture.

Praising Nagas for their unique culture and glorious history, Dhankhar said, “I salute tribal culture. I salute tribal energy.” Describing natural beauty of the state as enchanting, he underlined that the state has great tourism potential which needs to be tapped fully.

Lauding Nagaland for having lowest crime rate against the women in the country, the Vice President said that the state is showing way in women empowerment. Noting that India has assumed the presidency of G-20 from today, Dhankhar said that the world will be able to experience Naga hospitality when a meeting of G20 will be held in the state in April next year.

On this occasion, Vice President also released a postage stamp to commemorate the festival. After inauguration of Hornbill Festival, he visited Art Gallery and Morungs at Naga Heritage Village, Kisama.