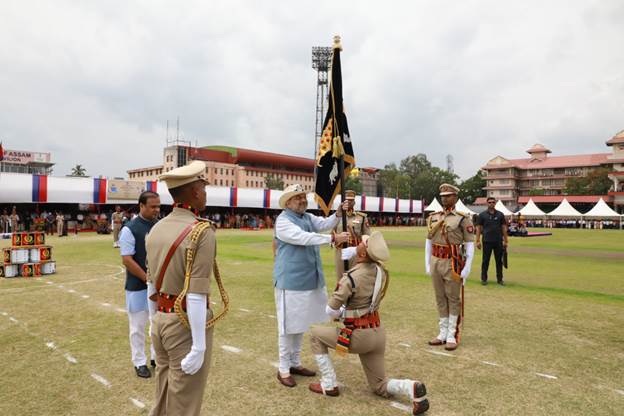 Union Minister for Home and Cooperation, Amit Shah presented the President’s Colours to the Assam Police for their exemplary services in Guwahati. The Chief Minister of Assam, Dr. Himanta Biswa Sarma and the Director General of Assam Police, and several dignitaries were also present on the occasion.

Amit Shah “ I am proud that Assam Police are the tenth police force in the country to receive this honour. Receiving the President’s Colours is an extraordinary achievement for any police organization and today the Assam Police have registered their name in this proud club and it is a matter of great pride for Assam”.

He also said that there would hardly be any force in the country which has faced such difficult situations. Remembering the rich and proud history of about 200 years of Assam Police, in 1826, the British started this police force by appointing some policemen at a district headquarters.

The Assam Police also has the distinction of giving genesis to the country’s oldest anti-militant force, the Assam Rifles. At the time of Independence, the number of Assam Police was 8,000, which has increased to more than 70,000 today.

Amit Shah said he was proud that the days of militancy have come to an end in Assam. He said that the misguided youths are joining the mainstream by putting up arms and efforts are being made to solve the 7 decades old problem by negotiating on the border dispute with the neighboring State.

Now AFSPA is also being removed, earlier the Armed Forces were given special powers, today the Assam Government is working on giving special power to the youth of Assam for development and a bright future and this is a matter of joy for all of us.