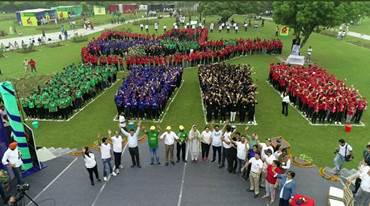 The country has witnessed many kinds of leagues from cricket to kabaddi. Today has been a league with a difference – The Indian Swachhata League – an inter-city competition ‘played’ on the parameters of swachhata powered by the youth of the city.

The first edition of the ISL witnessed a record of sorts with more than half a million youth joining hands for clean beaches, hills and tourist spots. The Indian Swachhata League kick starts the Swachh Amrit Mahotsav, a fortnight of activities to galvanize action around swachhata from 17th Sept. 2022, Seva Diwas, till 2nd Oct. 2022, Gandhi Jayanti.

Notwithstanding the showers of rain that many cities experienced, the million plus strong youth participation drew the presence of various prominent leaders, citizens, local influencers.

While Chandigarh Challengers started the activity with a message Har Din, Chaar Bin! by forming the largest human chain in the history of the city to advocate the use of four bins for improved waste segregation at source at the famous Rose Garden, Rajkot carried out a ‘Fun Run & Youth Run’ drive for citizens of all age group to support the Swachhata mission.

Uttarakhand Chief Minister Pushkar Singh Dhami joined the team of 2000 plus youth to win the battle against garbage in Dheradun. The Children’s Academy school of Malad cleaned the Aksa Beach in Mumbai, the New Delhi Municipal Council (NDMC) team cleaned the famous Hanuman Mandir, whereas the Municipal Corporation of Delhi (MCD) team was involved in cleaning locations at Qutub Minar, Akshardham Temple and Bharat Darshan Park.