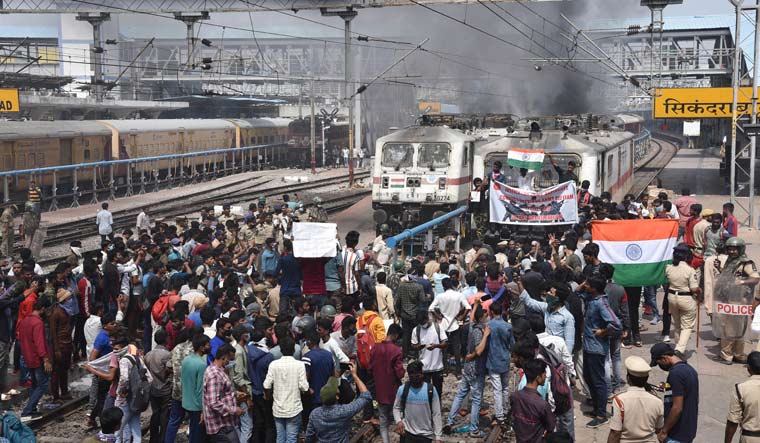 One person was killed in police firing in Secunderabad, the first casualty of protests against the Agnipath defence recruitment scheme that raged through several states for the third day on Friday with trains torched, public property vandalised and many thousands blocking tracks and highways.

At least 200 trains were affected, 35 cancelled and 13 short-terminated, railway officials said. As angry crowds, some armed with brickbats and stones, fanned out across large parts of India, from Uttar Pradesh to Telangana and Bihar to Madhya Pradesh, Union Home Minister Amit Shah and Army chief Gen Manoj Pande were among those who stepped in to assuage concerns.

The Army chief said the government’s decision to raise the upper age limit to 23 years from 21 under the scheme in 2022 will provide an opportunity to youths who were preparing to join the force but couldn’t in the last two years.

The Centre’s decision to increase the upper age limit will benefit a large number of youth, Shah said. He added that the recruitment process in the Army had been affected for the last two years due to the pandemic and Prime Minister Narendra Modi took a sensitive decision by showing concern for the youth of the country.

But the protests spread, seemingly uncontrolled, with crowds squatting on tracks and highways, pelting stones and vandalising public property to vent their anger resulting in losses worth many crores of rupees.

At least four trains were set on fire, two in Bihar, one in Uttar Pradesh and one in Telangana. In Bihar, where generations of youth train for years to get into the defence forces like in many other places, angry aspirants set fire to bogies of the New Delhi-Bhagalpur Vikramshila Express in Lakhisarai and the New Delhi-Darbhanga Bihar Sampark Kranti Express in Samastipur.

Demonstrators also blocked highways at several places in Buxar, Bhagalpur and Samastipur and burnt tyres. A mob attacked the home of BJP leader and Deputy Chief Minister Renu Devi in Patna. In Secunderabad, a parcel coach of a passenger train was set ablaze by a crowd of about 300-350.

One person was fatally injured when police fired in the air to disperse protesters on the rampage at the Secunderabad station.