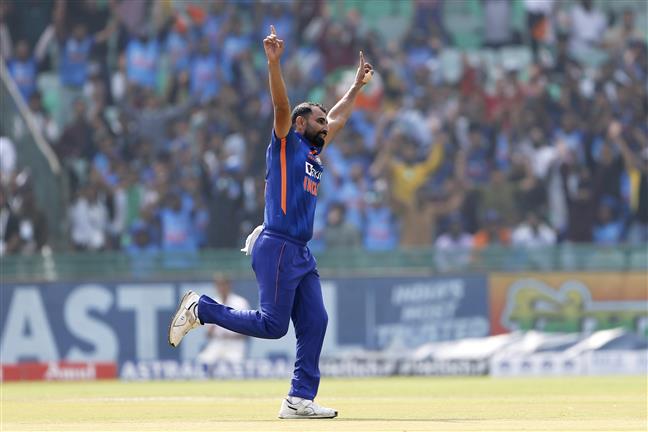 India’s relentless pace attack ran through a fragile New Zealand batting line-up as the hosts cantered to an eight-wicket win in the second ODI to seal the three-match series in Raipur on Saturday.

The Mohammed Shami-led attack produced an incisive effort to bowl out New Zealand for a meagre 108 before India knocked off the runs in 20.1 overs. Rohit Sharma hit a sublime 50 off 51 balls while Shubman Gill remained unbeaten on 40 off 53 deliveries.

It was an emphatic win but the sea of fans that had flocked the remotely located Shaheed Veer Narayan Singh Stadium for Raipur’s first international game was left wanting for more due to the early finish.

Shami (3/18) and Mohammed Siraj (1/10) made life tough for the batters with their high-quality seam bowling reducing New Zealand to a dismal 15 for five after Rohit opted to bowl. The odd ball stopping made the New Zealand batters’ job tougher though the Indian openers made batting look easy in the evening.

The third and final ODI will be played in Indore on Tuesday.

New Zealand opener Finn Allen was the first to depart after missing a full ball that came back in late to clip the pads and shatter the stumps. Siraj then got one to seam away from good length inducing an outside edge from number three Henry Nicholls with Gill doing the rest in the slips.

Two brilliant return catches from Shami and Hardik Pandya (2/16) put New Zealand in further trouble. Shami got one to shape away and Daryl Mitchell, in his attempt to flick it on the on-side, ended up mistiming it back to the bowler.