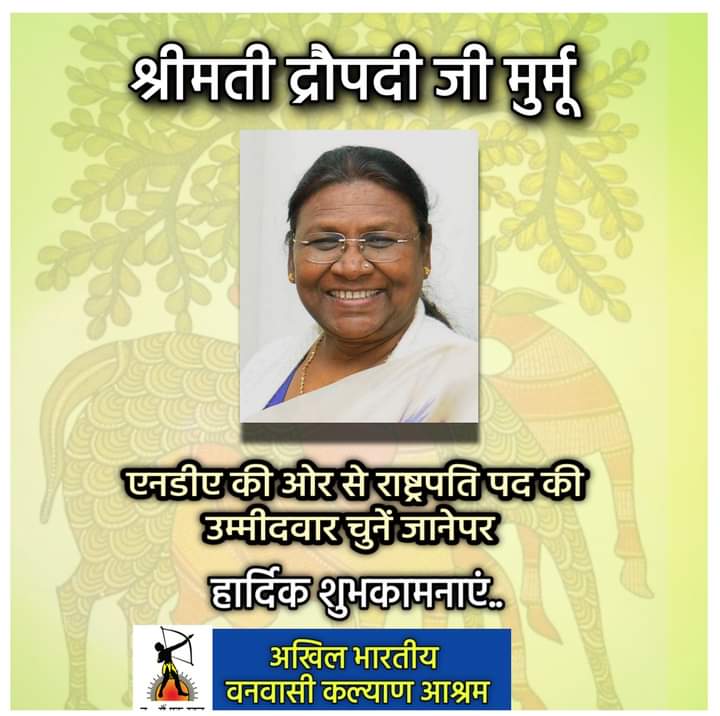 The Rashtriya Swayamsevak Sangh backed organisation ardently believes that a historical decision has been taken to nominate a Santali Janajati lady as the Presidential candidate when the entire country has been celebrating the glorious epoch of 75th years of independence under the theme of Swatantrata ka Amrut Mahotasav.

“We recognize this as a historic moment of far reaching impressions pertaining to 12 crore Janajati people of Bharat. The Janajatis are an integral constituent of tradition and inheritors of an esteemed culture of the great Indian nation. However they have been overlooked and disregarded for many centuries” said in a statement issued by ABVKA president Ramchandra Kharadi from a Kendriya Karyakari Mandal meeting held at Namsai in Arunachal Pradesh.

ABVKA congratulates Prime Minister Narendra ji Modi and all the political parties of NDA for nominating a representative of Janajatis for the top most constitutional post in the country, he added. The entire life journey of Draupadi Murmu has been a saga of strife. Hailing from Mayurbhanj district in Odisha, Draupadi Murmu devoted her life to serving the society and empowering the poor, downtrodden as well as the marginalized, defeating every adversity and distress to carve out a political career.

She has rich administrative experience and had an outstanding gubernatorial tenure of Jharkhand State in central India. ABVKA expresses its confidence that her experience and understanding of policy matters and compassionate nature will greatly benefit Bharat.
The organisation also appeals to all opposition political parties to support the nomination of Draupadi Murmu and elect her unanimously.

Applauding the NDA government for the commendable decision steering social cohesion, ABVKA stated that it has given a rare opportunity for all recognised political parties to pronounce their commitment towards comprehensive development of the Janajatis.