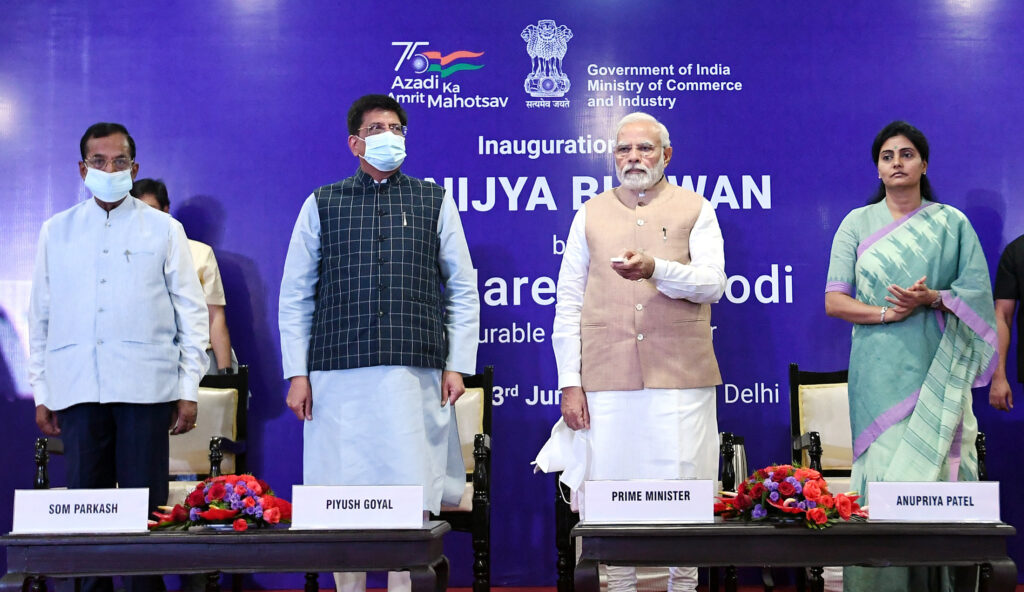 Inaugurating ‘Vanijya Bhawan’ and launching the NIRYAT portal in Delhi, Prime Minister Narendra Modi said another important step has been taken in the direction of the journey of Citizen-Centric Governance in New India on which the country has been moving for the last 8 years. The country has got the gift of a new and modern commercial building as well as an export portal, one physical and other digital infrastructure, he said.

Referring to many examples of the recent past, the Prime Minister said that in the new work culture of the New India, completion date is part of SoP and is strictly adhered to.

He remarked that only when the government’s projects do not hang for years and are completed on time, similarly, the government’s schemes reach their goals, then only, the taxpayer of the country is respected. Now we also have a modern platform in the form of the PM Gatishakti National Master Plan. He said that this Vanijya Bhawan will give a push to the nations ‘Gati Shakti’.

The Prime Minister noted that last year, despite the historic global disruptions, India’s exports stood at a total of $ 670 billion i.e. Rs 50 lakh crore. Last year, the country had decided that despite every challenge, it has to cross the threshold of $ 400 billion i.e. 30 lakh crore merchandise export. We crossed this and created a new record of export of $ 418 billion i.e. 31 lakh crore rupees.

“Encouraged by this success of the past years, we have now increased our export targets and have doubled our efforts to achieve them. Collective effort of everyone is very necessary to achieve these new goals”, he said, further adding that not only short term but long-term targets should be set.

The Prime Minister said that NIRYAT – National Import-Export for Yearly Analysis of Trade portal will help in breaking silos by providing real time data to all stakeholders. “From this portal, important information related to more than 30 commodity groups exported to more than 200 countries of the world will be available. In the coming time, information related to district-wise exports will also be available on this. This will also strengthen the efforts to develop the districts as important centers of exports”, he added.