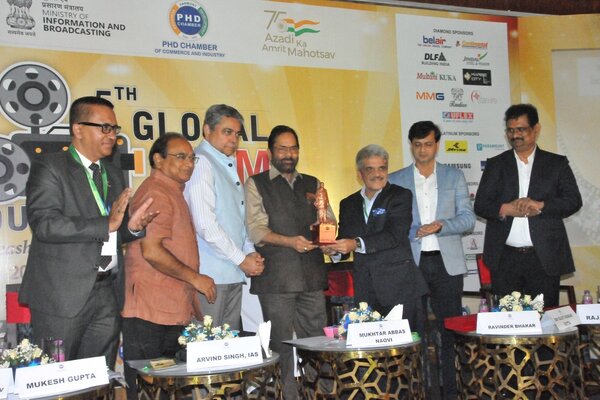 The torrent of films can hit hard on terrorism, said Union Minister for Minority Affairs, Mukhtar Abbas Naqv. Inauguratin the fifth Global Film Tourism Conclave (GFTC) in Mumbai, he said “Indian films and foreign films have played a significant role in giving meaningful message against the menace of terrorism, violence, radicalism. Today there is a need of such films which can not only entertain but also give effective message to the society.”

PHD Chamber of Commerce and Industry (PHDCCI) has organised the fifth GFTC on the theme ‘Unleashing the Power of Cinematic Tourism’ by joining hands with the Ministry of Tourism and Ministry of Information & Broadcasting.

GFTC provides a unique platform for Film Commissions, Tourism Boards and Production Houses to promote their locations, incentives and services to the vibrant Indian film industry. Film Tourism is when a viewer gets induced to visit a particular location after seeing it in a movie

The Minister also mentioned about the unique qualities of India as a destination for film tourism. “India is the only country in the world where every season, atmosphere, culture, ritual, summer, winter, rain, snow, mountains, rivers, waterfalls, seas, forests, beautiful villages, elegant cities are there. These unique characteristics make India an ideal place for any filmmaker.”

The Minister said that the successful and glorious journey of Indian cinema industry, which started with the common people, should appeal to everyone and not be constrained by societal boundaries. “We have to make the Indian film industry, the first choice of masses by cutting across the classes. Only then, the identity and pride of the Indian film industry will get the worldwide recognition,” he said.

Naqvi also appreciated the contribution of the country’s directors, producers, writers, actors, technicians whose efforts have taken the pride of Indian films to international markets.