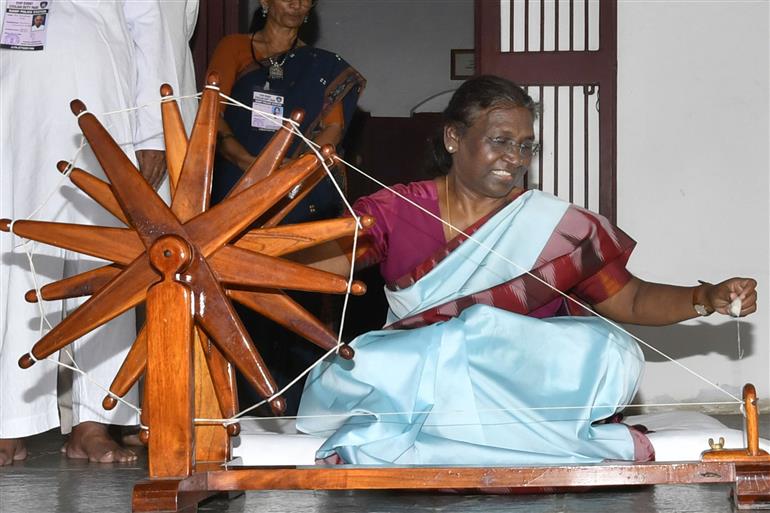 President Droupadi Murmu said that the people of Gujarat have a culture of enterprise and innovation. The entrepreneurs of Gujarat have given a special identity to Gujarat and India. Gujarat is one of the leading states in the country in terms of development.

She inaugurated/laid the foundation stones for various projects of Government of Gujarat related to health, irrigation, water supply and also the projects of Ministry of Ports, Shipping and Waterways related to upgradation of Deendayal Port, Kandla from GMERS, Gandhinagar, on Monday.

She said that Gujarat has presented examples of natural farming and environmental protection along with industrial progress. She noted that while about 5 percent of the country’s population resides in Gujarat, it contributes about 20 percent of the total national agricultural production. She said that successful experiments of agricultural development of Gujarat are being adopted all over the country.

The President said that for a very long time, the geographical location of Gujarat, especially in parts of North Gujarat, Saurashtra and Kutch, water scarcity had caused great problems to the people. But today that situation has changed completely. Under the ‘Sardar Sarovar Project’, irrigation water is being provided to the people from a vast canal network.

This has changed the lives of lakhs of people. She was happy to note that according to the ‘Composite Water Management Index’ of NITI Aayog, Gujarat has been ranked first in the country in water management for the past three years.

The President said that in the field of healthcare, Gujarat has made impressive achievements. She noted that Gujarat is the first state in India to issue health cards to pregnant women. She was also happy to note that according to a report of NITI Aayog released in 2020-21, Gujarat ranks first in the country in achieving the Sustainable Development Goal “Good Health and Well-being”.

Earlier after landing in Ahmedabad, the President visited Sabarmati Ashram where she paid tributes to Mahatma Gandhi and spun the charkha.