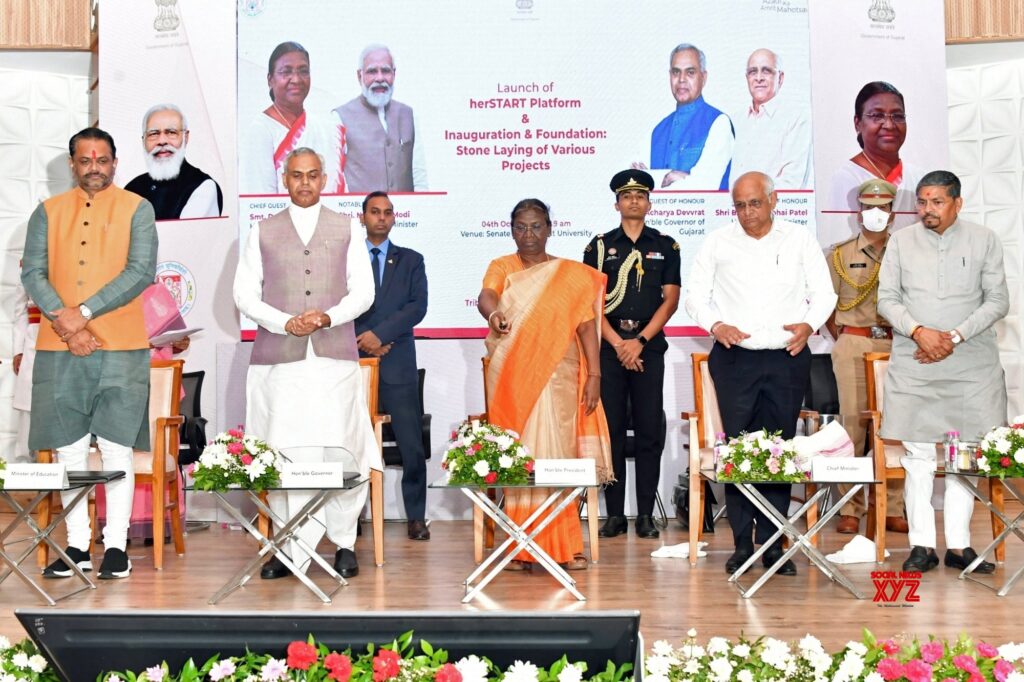 President of India, Smt Droupadi Murmu, launched ‘herSTART’ – a start-up platform of Gujarat University in Ahmedabad.  She also inaugurated/laid the foundation stone virtually from Gujarat University for various projects of the government of Gujarat related to education and tribal development.

The President said that it is natural for an institution which has alumni like Dr. Vikram Sarabhai, to be a pioneer in science, research and innovation. She noted that there are more than 450 start-ups working in the campus of Gujarat University. And more than 125 women-led start-ups are being actively supported by this university.

The President said that she was also happy to inaugurate projects like Sainik School, Girls Literacy Residential School and Eklavya Model Residential School related to education, especially girls and tribal education in Gujarat. Because the foundation stone for further strengthening India’s position in science, research and innovation will be built through school education.

The President said that Gujarat has made remarkable progress in the field of education among other sectors. The school drop-out rate in the state has come down from 22 percent to 1.37 percent in the last two decades.

The teacher-student ratio has also improved from 40 to 26. Today, through ‘Vidya Samiksha Kendra’, real-time monitoring of students and teachers is being done in about 55,000 schools, which is resulting in an increase in the learning outcome of the students.

She noted that under the ‘Mission School of Excellence’, a target has been set to upgrade the infrastructure of about 20,000 schools in the state in the next five years.

The President noted that Gujarat has also made significant progress in the field of higher education. While the number of colleges in the state was 775 in 2001-02, in 2020-21 this number increased to more than 3,100.

India’s first education quality and monitoring cell, ‘Garima Cell’ has been established in this state for evaluation of higher education. She said that with the effective implementation of ‘Van Bandhu-Kalyan Yojana’, there has been a significant increase in the literacy rate in the tribal society. This scheme has also improved the school dropout rate among tribal students.