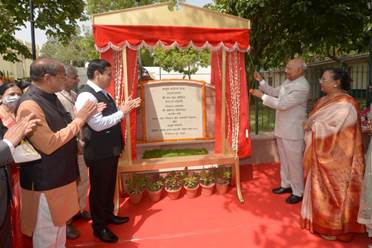 Ayush Wellness Centre (AWC) at President Estate started on 25th July 2015, as a joint initiative of the Ministry of Ayush and President Secretariat. The AWC has treatment facilities in the streams of Ayurveda, Yoga and Naturopathy, Unani, Siddha &Homeopathy, and it caters to the medical needs of the President, officials of President’s Secretariat and residents of the President’s Estate. The upgraded infrastructure along with facilities for Ayush system will follow standard protocols of treatment.

Appreciating the publication, President has said in his message contained in the book, “I am pleased to note that a large number of patients have benefitted from this Centre. Initiatives like patient education workshops, school health program and outreach OPDs etc undertaken by this Centre are well-appreciated. Telemedicine facilities started during the COVID-19 pandemic and online Yoga classes helped the beneficiaries during this difficult phase.”

On this occasion, Union Minister of Ayush Sarbananda Sonowal said, that AYUSH systems of medicine have been traditionally used for healthcare through centuries. He said that the health promotive, preventive and curative roles of Ayush systems are the reasons for its acceptance among the masses.