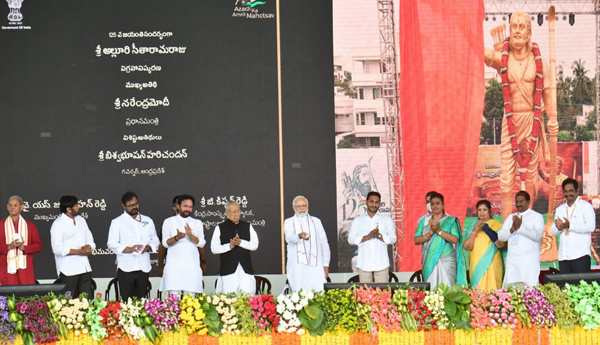 He also expressed happiness at meeting the members of the family of the great freedom fighter. The Prime Minister also paid tributes to the ‘Adivasi Parampara’ and the freedom fighter that emerged from the tradition of Andhra Pradesh.

He informed that the 125th birth anniversary of Alluri Sitarama Raju Garu and the 100th anniversary of Rampa Kranti will be celebrated throughout the year. Restoration of his birth place at Pandrangi, renovation of Chintapalli police station, construction of Alluri Dhyana Mandir at Mogallu, these works are symbols of the spirit of Amrit Mahotsav, he said.The Prime Minister said that today’s programme reflects the pledge of making everyone aware of the heroic deeds of our freedom fighters.

The Prime Minister noted that the freedom struggle is not just a history of a few years, few areas, or of a few people. This history is the history of sacrifice, tenacity and sacrifices of every nook and corner of India. “History of our freedom movement is a symbol of the strength of our diversity, culture and of our unity as a nation”, he added.

Terming Alluri Sitarama Raju a symbol of India’s culture, tribal identity, valour, ideals and values, the Prime Minister remarked that from the birth of Sitaram Raju Garu to his sacrifice, his life journey is an inspiration to all of us. He dedicated his life for the rights of tribal society, for their happiness and sorrow and for the freedom of the country. “Alluri Sitarama Raju represents the spirit of ‘Ek Bharat Shreshtha Bharat’ that has been uniting the country in one thread of unity”, he added.