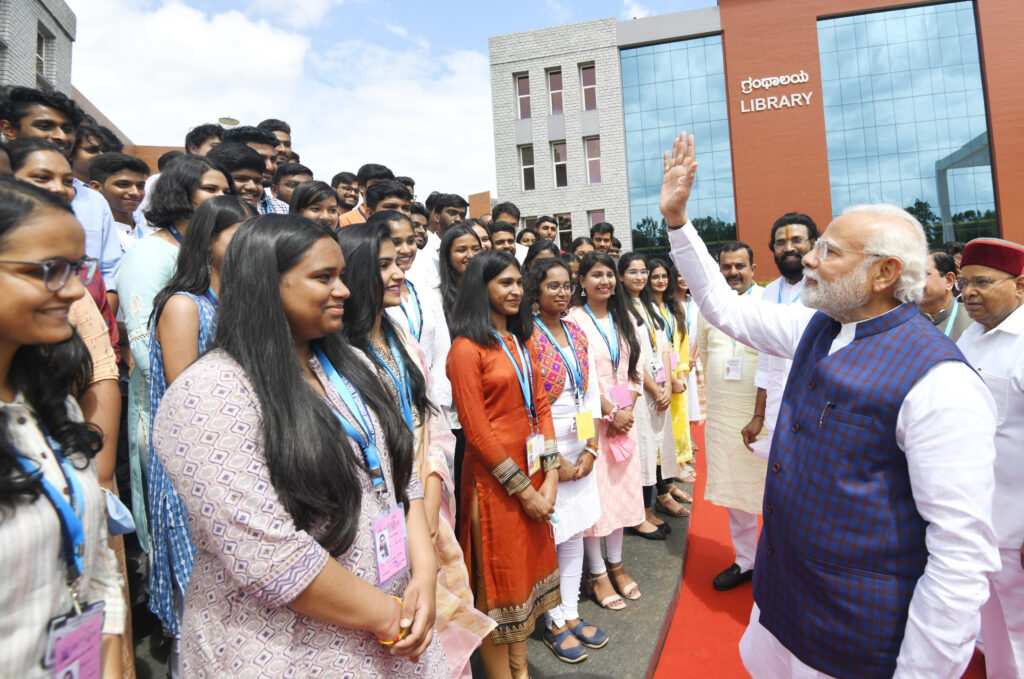 Prime Minister, Narendra Modi said that Benguluru is the dream city of the youth of the country and behind it is entrepreneurship, innovation, proper utility of public as well as private sector. He said Bengaluru is a lesson for those who still disrespect the spirit of private enterprise of India. 21st century India,

He inaugurated and laid the foundation stone of multiple rail and road infrastructure projects worth over Rs 27000 crore in Bengaluru on Monday. Earlier, the Prime Minister inaugurated the Centre for Brain Research and laid the foundation Stone for Bagchi Parthasarathy Multispeciality Hospital at IISc Bengaluru. He also inaugurated a new campus of Dr. B R Ambedkar School of Economics (BASE) University and unveiled the statue of Bharat Ratna Dr B. R. Ambedkar in their campus. He also dedicated the upgradation of 150 ITI as Technology hubs.

Addressing the gathering, the Prime Minister said the foundation stone of 5 National Highway Projects, 7 Railway Projects have been laid in Karnataka and a significant milestone of 100% electrification of Konkan Railway has been witnessed today. All these projects will give new facilities, new opportunities to the youth, middle class, farmers, workers and entrepreneurs of Karnataka.

He added that his government is committed to connecting the suburban areas of Bengaluru with better connectivity. He reiterated his commitment to deliver the project in time and said that he will work hard to fulfil the dreams of people of Bengaluru in next 40 months which were pending for the last 40 years.

The Prime Minister said that connectivity by Bengaluru Suburban rail project will connect Bengaluru city with its suburbs and satellite townships and that will have a multiplier effect. Similarly, the Bengaluru Ring Road project will reduce the city’s congestion.

The Prime Minister pointed out that in the last 8 years the government has worked on complete transformation of rail connectivity. He noted that Indian Railways is getting faster, cleaner, it is becoming modern, safe and citizen friendly.

“We have taken the rail to those parts of the country where it was difficult to even think about it. Indian Railways is now trying to provide those facilities and the ambience which was once found only in airports and air travel. Modern railway station in Bengaluru named after Bharat Ratna Sir M. Visvesvaraya is also a direct proof of this”, he said. The Prime MInister stressed the importance of integrated multimodal connectivity.