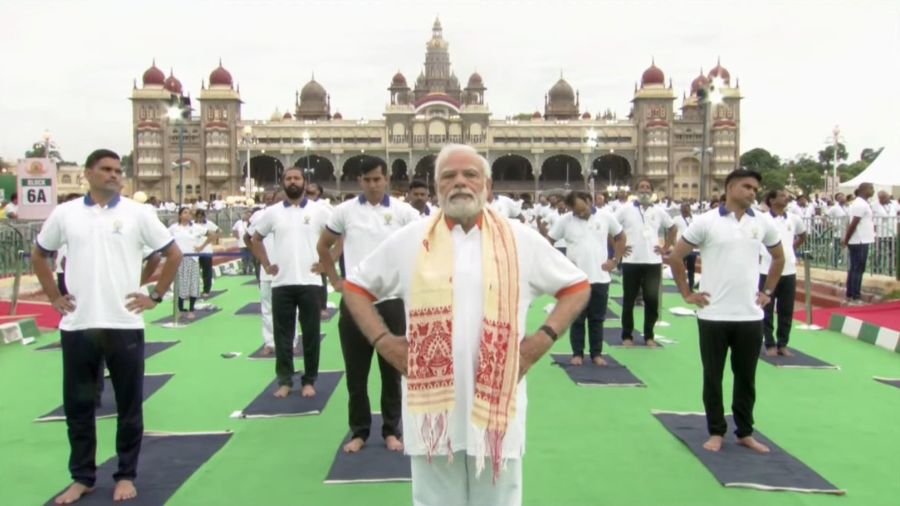 On the widespread acceptance of Yoga, the Prime Minister remarked that “Yoga has now become a global festival. Yoga is not only for any individual, but for the entire humanity. Therefore, this time the theme of International Day of Yoga is – Yoga for humanity”.

Union Minister of Ports, Shipping & Waterways and Ayush, Sarbananda Sonowal expressed his heartfelt gratitude to Prime Minister Modi for his pivotal role in promoting Yoga globally. The 8th International Day of Yoga was led by the Prime Minister along with 15,000 yoga enthusiasts at Mysuru palace.

Participating in Yoga Day celebrations at Parade Grounds, Secunderabad, Vice President M Venkaiah Naidu described Yoga as ‘to join’ or ‘to unite’, which emphasizes the unity and harmony between the mind and body, and man & nature.

“On this occasion, I would urge everyone to work for the unity and harmony among all sections of the society”, he said. Naidu urged people to take inspiration from our ancient philosophy and work for not just transforming our minds and bodies, but also the overall transformation of the nation.

Meanwhile, Defence Minister Rajnath Singh has exhorted the people to practice Yoga regularly as it helps to keep the body and mind healthy. He was virtually addressing a function organised by Isha Foundation of Shri Sadhguru on the occasion of International Day of Yoga.

Throwing light on the benefits of the ancient Indian practice, he asserted that Yoga is not merely a good means of attaining physical fitness, but also a way to connect a person with himself by removing restlessness and confusion inherent in worldly existence. He said, the practice helps in controlling thoughts & emotions and training them in a positive direction.

Union Minister of State for Home Affairs Ajay Kumar Mishra participated as the Chief Guest at the Yoga function in Kargil in Ladakh, along with officials of the Union Territory of Ladakh, other dignitaries and students.

Union Minister for Health and Family Welfare, Dr Mansukh Mandaviya joined the 8th International Day of Yoga (IDY) 2022 celebrations with the citizens of Gujarat at the Statue of Unity, in Kevadia today.

After two years of relatively symbolic celebration of Yoga Day to align with the Covid-19 pandemic, widespread enthusiasm and participation was observed across the country for this year’s 8th edition of the IDY 2022 to support the message of “Yoga for Humanity”.