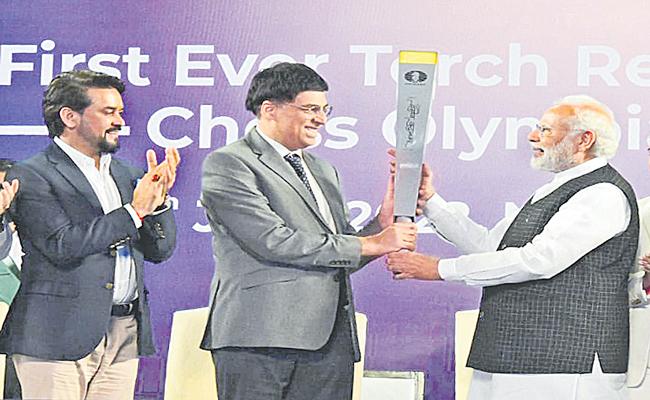 Prime Minister  Narendra Modi launched the historic torch relay for the 44th Chess Olympiad today at Indira Gandhi Stadium, New Delhi, on Sunday evening. FIDE President Arkady Dvorkovich handed over the torch to the Prime Minister, who in turn handed it over to Grandmaster Vishwanathan Anand.

This torch will be taken to 75 cities in a span of 40 days before the final culmination at Mahabalipuram near Chennai. At every location, chess grandmasters of the state will receive the torch.

This is the first-ever torch relay for the Chess Olympiad ahead of the 44th edition of the event, which is to be held in Mahabalipuram from July 28 to August 10. The international chess body, FIDE, for the very first time has instituted the torch relay, which is part of the Olympic tradition, but was never done in the Chess Olympiad.

In nearly 100 years of the history of the Chess Olympiad, it’s the first time that India will be hosting the prestigious event. With 188 countries registered for the upcoming Olympiad, the country is set to witness a huge congregation of nations for a sporting event for the first time on Indian soil.

Speaking on the occasion, PM Modi, who made a ceremonial move on the chess board against woman Grandmaster  Kneru Humpy, said: “The first-ever torch relay of the Chess Olympiad is starting from India, it is also the first time India is hosting the big event.

“We are proud that the sport rose from its birth place and has made its presence felt all over the world. We are delighted to see chess return to its birth place and celebrate its success in the form of Chess Olympiad. “FIDE has decided that the torch relay will start from India. It is not just India’s honour but honour for chess.”

Modi said chess is not just a game but has now become an educational tool.

“In India wrestling, kabaddi, malkhamb were played to remain fit and for analytical skills, our forefathers invented chess. Chess travelled to whole world and became popular. Today chess has become an educational tool, chess players are becoming problem solvers,” he said. Modi said yoga and meditation are vital to success in chess.