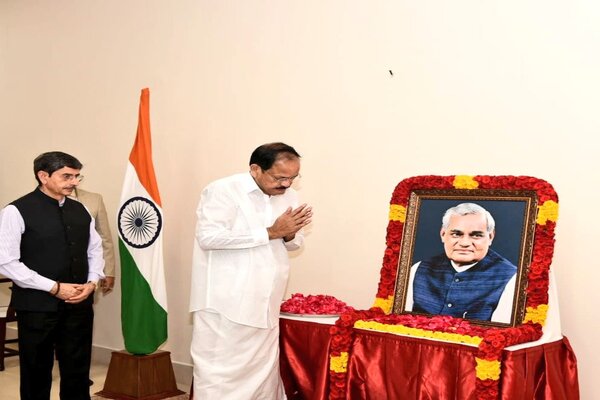 Vice President M Venkaiah Naidu paid rich tributes to the late former Prime Minister,  Atal Bihari Vajpayee in Chennai on the occasion of his 97th birth anniversary, which is celebrated as the ‘Good Governance Day’. In a video message from Raj Bhavan, Chennai, i Naidu said Ajal ji was one of the tallest Indian leaders ever and one of the most glittering stars of India’s political firmament.

Naidu recalled how Atal Ji strongly believed in placing people at the centre of the development agenda and demonstrated how democracy can be strengthened through good governance in a people-centric mode. Observing that good governance enhances trust of people in the administration and catalyses economic growth, Naidu expressed concern that there is a ‘governance deficit’ in delivery of services at the level of State governments and local bodies.

He stressed that such a deficit increases time and cost overruns, jeopardises the goal of socio-economic advancement and alienates people from participatory governance. This needs to be addressed on priority, he urged.

Vice President noted various initiatives to improve governance such as introduction of Direct Benefit Transfer, opening of bank accounts for financial inclusion, and the adoption of technology to improve transparency, accountability and citizen participation in decision making. He called for the adoption of such initiatives at the second and third tiers of governance.

Naidu also suggested better use of citizens’ charters prescribing time frames for delivery of services to improve the quality of governance.  Governor of Tamil Nadu,  R.N. Ravi was present during the floral tribute to Shri Vajpayee.

Venkaiah Naidu today stressed that good governance needs ‘good legislatures’ to ensure the accountability of the executive to the people. He said that using various instruments such as Question Hour, Short Duration Discussions, debates on Bills, etc elected representatives can question the government about implementation of policies, execution of various welfare and development projects.

For this, Naidu observed, there is a need for ‘good legislators’ who give their best to do justice to the trust reposed in them by the people. He Naidu expressed concern that the oversight and accountability functions of the legislatures have been falling below expectations with persistent disruptions and forced adjournments.

He cautioned that “Dysfunctional legislatures lead to compromised governance as there would be no fear among the executive of being questioned in the legislatures.” He observed that Rajya Sabha has lost about 61% of the total Question Hour time due to disruptions during the just concluded winter session. This is a serious abdication of the important oversight function of the House, he noted.

“If an MP or MLA does not discharge functions effectively, he or she would have no moral right to question the executive at various levels”, he added.