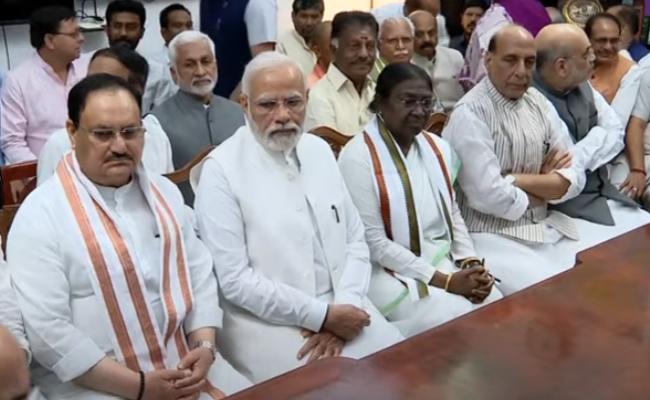 Droupadi Murmu, NDA’s candidate for the presidential election filed her nomination papers at the Parliament on Friday. She was accompanied by Prime Minister Narendra Modi, Union ministers Amit Shah, Rajnath Singh and Nitin Gadkari, chief ministers of various NDA ruled states and leaders of parties in the alliance.

The 64-year-old from Odisha and has earlier served as minister in Odisha government and governor of Jharkhand. Murmu filed her papers before Returning Officer P C Mody. In the first set, PM Narendra Modi himself became the proposer. Apart from this, members of the BJP Parliamentary Party including Amit Shah, and Rajnath Singh approved her name.

YSR Congress’ V Vijaysai Reddy and Biju Janta Dal’s Sasmit Patra, who are not part of the NDA, were also in Parliament to back her nomination. AIADMK leaders O Paneerselvam and M Thambidurai and JD-U’s Rajiv Ranjan Singh also reached Parliament.

Murmu, the former governor of Jharkhand and a prominent politician from Odisha’s tribal community, will be up against former Union minister Yashwant Sinha, 84, the Opposition’s candidate in the July 18 election, which will be followed by vote counting on July 21.

Nadda has also called NC leader and former Jammu and Kashmir chief minister Farooq Abdullah and some other opposition leaders.

Murmu herself had earlier called senior opposition leaders, including Sonia Gandhi, Sharad Pawar and Mamata Banerjee, and sought their support for her candidature for the top constitutional post in the country. Murmu, if elected, would be the first tribal and the second woman to occupy the post of president of India.