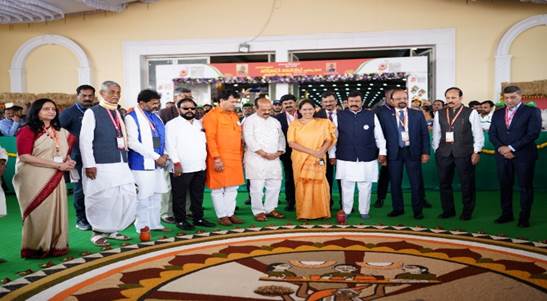 Millets & Organics 2023 – International Trade Fair kicks off in Thripuravasini, Bengaluru on Friday. The three-day event was divided in multiple segments including Exhibition, Pavilion, B2B networking and much more.

The exhibition segment of the event was inaugurated by Chief Minister Basavaraj Bommai.  The trade fair is a platform for farmers, farmer groups, domestic and international companies, central and state institutions in organic and millet sector to connect and explore opportunities in agriculture, horticulture, processing, machinery and agri-technology.

The Government of Karnataka has been a leader in promotion of millets – The first Organics and Millets Fair was held in 2017, the second and third editions in 2018 and 2019 in Bengaluru.

The inauguration of the international conference was done by Sushri Shobha Karandlaje, Union Minister of State, Ministry of Agriculture & Farmers Welfare. She called for cultivation of quality millets with optimal use of pesticides that can be taken to international platform which would help them in gaining competitive prices for their produce. The Government’s commitment to increase farmers’ income can be seen through significant rise, witnessed in agriculture exports.

Kailash Choudhary, Union Minister of State, Ministry of Agriculture & Farmers Welfare emphasized that consumption of millets is the solution to malnutrition, which will also benefit farmers to get better livelihood and increased income.