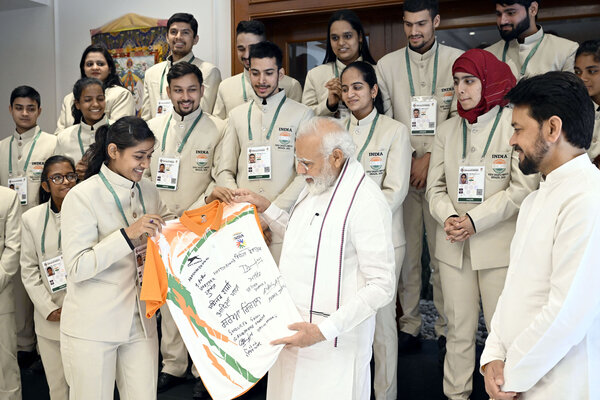 Prime Minister, Narendra Modi interacted with the Indian contingent for recently held Deaflympics as he hosted them at his residence today. In the best-ever performance, Indian team won 16 medals including 8 Gold medals in the Deaflympics, held in Brazil.  Union Minister Anurag Singh Thakur and  Nisith Pramanikwere also present on the occasion.

Interacting with Rohit Bhaker, senior member of the contingent, the Prime Minister discussed his way of dealing with the challenges and his way of assessing his opponents. Rohit also told the Prime Minister about his background and inspiration for getting into sports and staying for so long at the highest level.

Modi noted the continued zeal in the player and his rising performance with advancing age. “Not resting on laurels and not feeling satisfied is one of the key qualities of a player. A player sets ever higher goals and strives to attain them”, the Prime Minister said.

Wrestler Virender Singh talked about the legacy of his family in wrestling. He also narrated his satisfaction in finding opportunities and competition in the deaf community. Modi noted his medal winning consistent performance in Deaflympics since 2005 and complimented him for his desire to excel.

Shooter Dhanush also credited his family support for his continued quest for excellence. He also told how yoga and meditation helped him. He said that he considers his mother his role model. The Prime Minister paid tributes to his mother and his family for supporting him. He expressed happiness that Khelo India is helping the athletes at the grassroot level.

Jafreen Shaik, Tennis also talked about support of her father and family. She expressed her happiness on interacting with the Prime Minister. Modi said that apart from being the synonymous with the prowess and capability of the daughters of the country, she is a role medal for the young girls. “You have proven that if India’s daughter set their eyes on any goal, no obstacle can stop them”, He added.