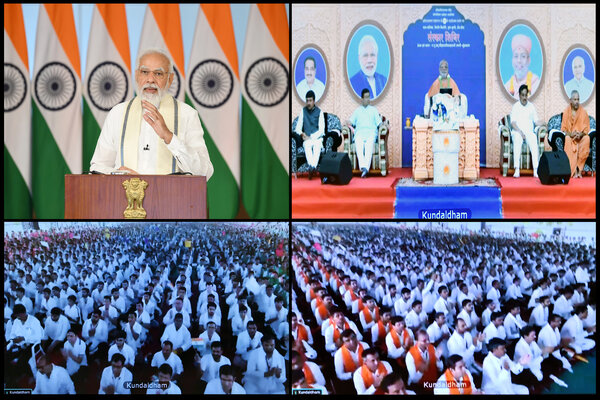 Prime Minister Narendra Modi said that our scripture has taught us that the constant character-building in every generation is the basis of every society.  He emphasised that shivir like the one that is being conducted today is not only an effort to create good ‘sanskars’ among the youth but also a pious and natural campaign for regeneration of the society, identity, pride and nation.

He urged to take a collective resolve and make efforts to build a new India. A new India, whose identity is new, forward-looking and traditions are ancient. A new India, which moves ahead by taking both new thinking and age-old culture together and should give direction to the entire mankind.

“Wherever there are challenges, India is present with hope, wherever there are problems, India comes out with solutions”, he added.He said from delivering vaccines and medicines to the world amid the Corona crisis to the hope of a self-reliant India amidst disrupted supply chains to the role of a capable nation for peace in the midst of global unrest and conflicts, India is the new hope of the world today.

The Prime Minister remarked that we are showing the path of Yoga to the entire humanity, we are introducing them to the power of Ayurveda. He noted that today, the working style of government and thinking of society has changed along with increased people’s participation. Today India has the third-largest start-up system in the world that is being led by the youth of India, he added.