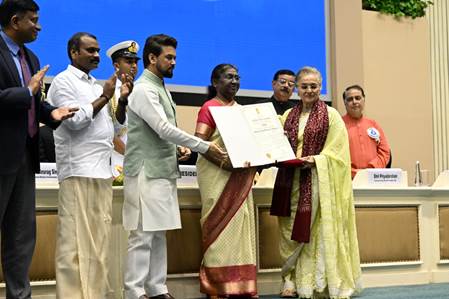 Films have the widest impact among all the art forms, the President Droupadi Mumu remarked, and added that films are not just an industry but also a medium for an artistic expression of our value system. Cinema is an effective tool for nation building as well.

She conferred National Film Awards for the year 2020 under various categories at 68th edition of the ceremony in New Delhi on Friday. She congratulated Dadasaheb Phalke Awaree Ms Asha Parekh for her special contribution to the world of cinema and said that this award to her is a recognition of women empowerment.

Smt Murmu said that as the nation celebrates Azadi Ka Amrit Mahotsav, feature and non-feature films related to the life stories of freedom fighters, known and unknown, will be welcomed by Indian audience. The audience desires production of such films which bolster unity in the society, accelerate the pace of development of the nation and strengthen the efforts of environmental protection.

Highlighting the recognition enjoyed by Indian music abroad, the President said that has been a great medium for spreading India’s soft-power globally. She further remarked that In July this year, a meeting of foreign ministers of the member countries of Shanghai Co-operation Organization was held in Uzbekistan where a popular song from a 1960s Hindi film was performed by a foreign band at the closing ceremony.

Adding further, she said that to make a more effective use of this soft-power, we must enhance the quality of our movies. “Now in our country movies made in one region are becoming very popular in all other regions as well. In this way Indian cinema is tying all the countrymen in a cultural thread. This film community has a huge contribution to the Indian society”, she said.

Union Minister for Information & Broadcasting  Anurag Thakur said that he holds a strong belief that Cinema is poetry in pictures mirroring the magic, marvel and madness of all that which makes us feel alive and human. Cinema has captured and carved the conscience, community and culture of our country. Debutants, professionals and legends from the Indian Film Industry have tickled and touched our hearts and minds for over a century, he further added.