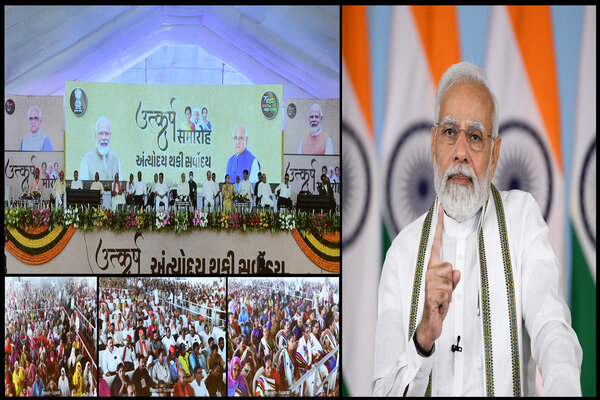 Prime Minister Narendra Modi addressed ‘Utkarsh Samaroh’ in Bharuch, Gujarat via video conferencing. The programme marks the celebration of 100% saturation of four key schemes of the state government in the district, which will help provide timely financial assistance to those in need. Chief Minister of Gujarat, Bhupendrabhai Patel was among those present on the occasion.

Women of the region presented a huge Rakhi to the Prime Minister, wishing him health and long life and thanking him for all he has done for the dignity and ease of living of women in the country. He interacted with the beneficiaries of various schemes.

Interacting with a visually challenged beneficiary, the Prime Minister enquired about the education of his daughters. The daughter got emotional regarding her father’s problem. A visibly moved Prime Minister told her that her sensitivity is her strength. He also asked about how he and his family celebrated Eid.

He complimented the beneficiary for getting vaccinated and nurturing the aspirations of his daughters. The Prime Minister interacted with a woman beneficiary and asked about her life and praised her determination to lead a life of dignity.

A young widow informed the Prime Minister about her journey of giving a good life to her children. The Prime Minister suggested that she should get into small savings and asked the authorities to support her in her determined journey.

Addressing the gathering, the Prime Minister said that today’s Utkarsh Samaroh is a testimony to the fruitful results achieved when the government sincerely reaches out to the beneficiary with a resolve. He commended the Bharuch district administration and Gujarat government for a 100 percent saturation of 4 schemes related to social security.

The Prime Minister noted the satisfaction and confidence among the beneficiaries. He said many citizens from tribal, SC, and minority communities are deprived of the benefits of the schemes due to lack of information. He also noted that the spirit of Sabka Saath Sabka Vishwas and honest intentions invariably give good results.