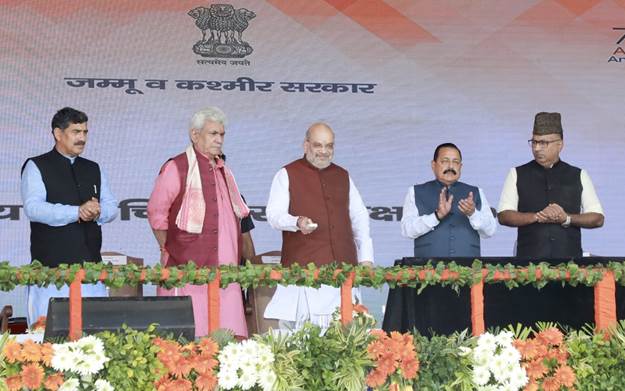 Union Home and Cooperation Minister Amit Shah said that the massive rally in Rajouri is a response to those who claimed that if Article 370 is removed, there will be violence in Jammu and Kashmir.

Addressing a public meeting in Rajouri, in Jammu and Kashmir, he said that for 70 years, three families ruled in J&K and restricted democracy within their families. But, since 2014, under the leadership of Prime Minister Narendra Modi, Panchayat elections were conducted in 2014 and thereafter Tehsil and District Panchayat elections were conducted in 2019, and now the governance of Jammu and Kashmir, which was earlier restricted within three families, now includes 30 thousand people.

He said that with the removal of Article 370, depressed classes, Dalits, Tribals and hill people have got their rights in J&K. He asserted that  now no one can suppress the rights of people as Prime Minister Modi has ensured that democracy is not restricted within three families, but 30 thousand people become part of it.

He said that earlier injustice was meted out to the Pahari people of Jammu and Kashmir, as they did not get any Reservation. The Prime Minister cleared the way for reservation by removing Article 370.

Amit Shah said that Prime Minister Narendra Modi has launched a continuous campaign against terrorists and separatists, as a result of which the number of terrorist incidents in Jammu and Kashmir has come down drastically.

The number of terrorist incidents between 2006 and 2013 was 4,766 whereas after the abrogation of Article 370, terrorist incidents in the period from 2019 to 2022 have come down from 4,766 to just 721. Along with this, there is a decrease in the casualties of the security personnel. This shows that Jammu and Kashmir is now safe, he added.