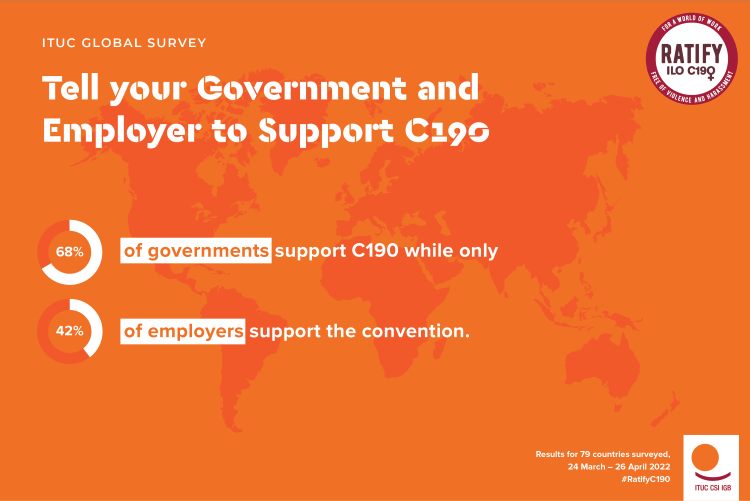 By the end of 2023, 50 governments will have ratified C190, according to trade unions surveyed from 79 countries across the world and recent assessments. With Central Africa Republic, El Salvador and Peru being the latest to have ratified C190, we are now at 18 ratification’s.  This tallies with another key finding of the ITUC survey: 68% of governments support C190 while only 42% of employers in countries support the convention.

Trade unions across the world are working to secure the ratification and implementation of C190:

ITUC General Secretary Sharan Burrow said: “It is critical to ensure that workers, in all their diversity, can enjoy the right to a world of work free from violence and harassment. We urge all governments to move through the ratification process as soon as possible.

“We welcome the recent decision at the International Labour Conference to add OHS as a fundamental right, which will further pave the way for the effective implementation of C190, which includes OHS provisions such as the obligation of employers to carry out workplace risk assessments.”

Join our call for the universal ratification of C190 on 21 June, the third anniversary of the adoption of ILO Convention 190 and Recommendation 206.

The full ITUC survey findings will be published this September in a C190 global report along with a call to governments to #RatifyC190 in the lead up to the @16DaysCampaign, 25 November – 10 December, and the ITUC Congress, 17 – 22 November 2022.