Tribunal on the Murder of Journalists Convenes This Week 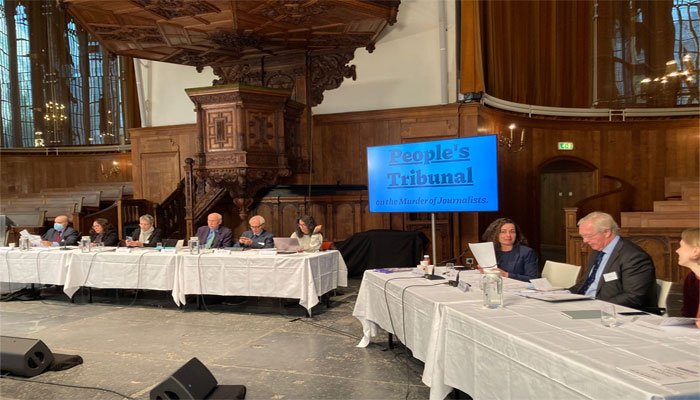 On May 12-17, the People’s Tribunal on the Murder of Journalists will convene in the Hague to hear oral arguments and witness testimony in the murder cases of two journalists, one Sri Lankan and one Syrian, whose cases have become emblematic of impunity for crimes against the press in their countries.

The two case hearings will feature testimony from experts and journalists speaking to the threats facing the press in both countries. The cases will also consider evidence and testimony in both the murder of Sri Lankan journalist Lasantha Wickrematunge   and the Syrian journalist Nabil Al-Sharbaji.

Wickrematunge was a leading independent journalist known for reporting on the Sri Lankan civil war and the Rajapaksa regime, and foresaw his own death at the hands of government assassins in a posthumously published editorial.

Al-Sharbaji documented protests in the Syrian city of Darayya and suffered multiple arbitrary arrests, and as a result of torture and prison conditions, died in government custody.

The Peoples’ Tribunal has officially notified the Sri Lankan and Syrian governments of the indictment and invited them to represent themselves during the hearing in order to present a defense.

The People’s Tribunals on the Murder of Journalists are a form of alternative justice organized by A Safer World for the Truth,  a collaborative project between the Committee to Protect Journalists (CPJ), Reporters Without Borders (RSF) and Free Press Unlimited (FPU).

The Syria case is also being supported by the Syrian Center for Media and Freedom of Expression. People’s Tribunals are designed to hold states accountable for violations of international law by building public awareness and generating a legitimate evidence record, and play an important role in empowering victims and recording their stories.

In addition to the Syria and Sri Lanka cases, the Tribunal previously heard testimony in a case in Mexico on April 25 and 26. Verdicts in all three cases are expected on June 20, 2022, in The Hague.