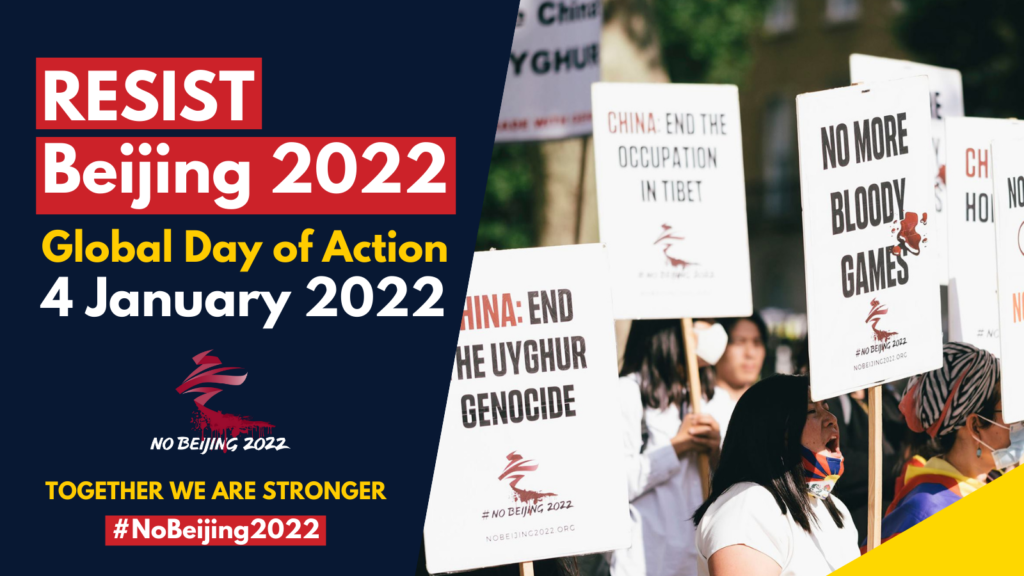 International Tibet Network  (ITN) has been campaigning 2022 Beijing Winter Olympics, dubbed as the Genocide Games by human rights groups. Just one  month ahead of the event, on January 4th, 2022, one month before the Opening Ceremony, it is observing as a Global Day of Action.

Tashi Delek, Asia Regional Coordinator, Students for a Free Tibet, said he strongly believe that we must counter China’s every propaganda tactic and make Tibet part of the global discourse on China. One such propaganda tactic is the 2022 Beijing Winter Olympics, dubbed as the Genocide Games by human rights groups.

SFT has been campaigning nonstop to educate the world about the danger of treating these Games like any other Olympics in the past. And with nearly 4 weeks left until the start of the Olympics, it is vital that we do even more to combat the Chinese Government’s attempts to sportswash the severe human rights violations in Tibet, East Turkestan, Southern Mongolia, Hong Kong, and China.

In New York, he said their protest will not only question China’s legitimacy as the host nation but will also challenge NBC for their broadcasting deal with Beijing 2022. By associating with the Genocide Games as its prime broadcaster, NBC is complicit in the CCP’s authoritarian policies.

Many attempts to reach out to NBC for a meeting have been unsuccessful and we have continuously raised concerns through recent protests outside the NBC studio at Rockefeller Center where we were met by seas of curious tourists who are part of NBC’s global market, he added.

Senator Jeff Merkley and Representative James McGovern, the chair and co-chair of the Congressional-Executive Commission on China, have additionally sent a letter to NBC CEO Jeff Shell calling for commitments from the broadcaster that include providing background coverage of the Chinese government’s human rights abuses.

The letter read, “Athletes, support staff, and members of the media will be present in a country where an active genocide is taking place, and in adhering with the charter of the Games to foster ‘respect for universal and fundamental ethical principles,’ NBCUniversal must think about what that means for those participating in Beijing and Chinese citizens alike.”

Tseten said companies like NBC will only take action if we do enough to tarnish the company’s reputation for their association with a genocidal regime.