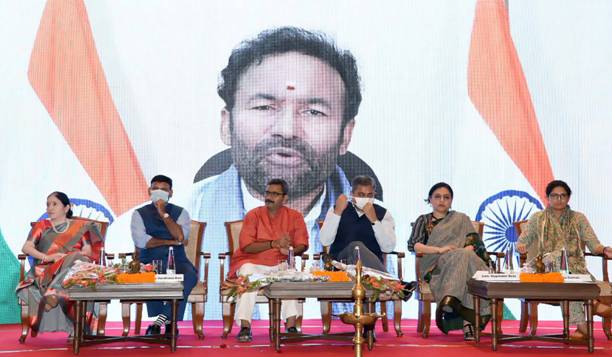 Union Minister of Tourism, Culture G. Kishan Reddy along with Chief Minister of Uttar Pradesh  Yogi Adityanath and Minister of State for Tourism and Defence Ajay Bhatt inaugurated various components developed at the Govardhan Bus Stand under the project “Development of Govardhan, Mathura” under PRASHAD Scheme of the Ministry of Tourism today virtually.

The PRASHAD scheme is being implemented to improve the Tourism infrastructure like facilitation centers for tourists such as Information and Interpretation Centers, ATM and Money exchange facilities, Eco-friendly buses, lighting, parking, toilets, cloak rooms, first aid centers, rain shelters and internet connectivity at the Tourist locations, he added.

Stating the projects implemented  in the state, the Ministeri Kishan Reddy said “So far under the PRASHAD Scheme, Uttar Pradesh and Uttarakhand together have close to 25% of the total allocation of approximately Rs. 1200 crores towards pilgrimage, spiritual and heritage rejuvenation”.

The project for “Development of Govardhan Mathura” under the PRASHAD scheme was approved by the Ministry of Tourism with the cost of INR 39.73 Cr. in January 2019. The components viz. ‘Multi Level Car Stand Block, Cloak Room & Toilets, Boundary wall and Surface development at Govardhan Bus Stand’ has been successfully completed with the cost of INR 15.82 Cr.

Other components sanctioned under the project include development of Mansi Ganga, Chandra Sarovar, Govardhan Parikrama and interventions at Kusum Sarovar. The illumination of the Kusum Sarovar is already completed and dedicated to the nation in February 2021. The work for all other components is in advanced stages of completion.

The components developed under the project have resulted in facilitation of pilgrims and enhancement of the pilgrimage experience. The interventions implemented have resulted in regulation of pedestrian traffic on the Govardhan Parikrama Path.